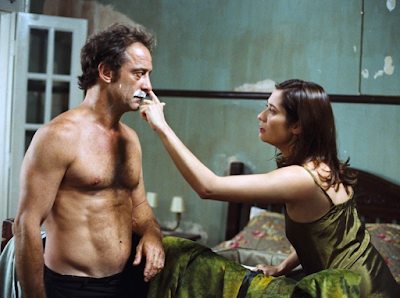 Did you know there's a whole horror movie about a mustache? Okay calling La Moustache a "Horror Movie" is maybe a bit of a nudge, but I found it existentially unnerving enough to qualify. French author Emmanuel Carrère directed the film version of his own short story "La Moustache" in 2005 and it is absolutely terrific -- I highly recommend seeking it out. It stars Vincent Lindon and Emmanuelle Devos as a married couple; one night Lindon decides to shave off the mustache he's had for all of his adult life, and the next day everyone behaves as if he never had a mustache at all - from there he spirals into a crisis. As one would do! 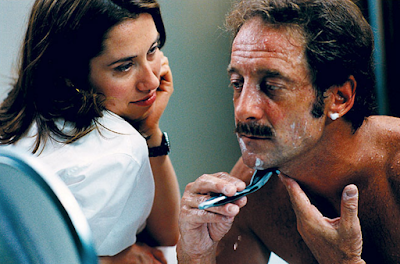 The film's actually on Amazon Prime right now, if you want something strange and unsettling to satisfy your All Hallows urges. I haven't seen it in ages and might hit it up myself. I also highly recommend the story itself, which I'd read before seeing the film and had dug very much. (Click here for all of our "13 Mustaches of Halloween" posts.)
.
Who? Jason Adams When? 1:30 PM

Am I crazy or is that actor crazy hot?