The Devil Made Neill Do it 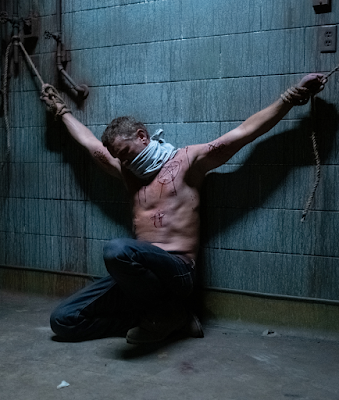 This is one of those little stories that seems to've slipped through my cracks (so to speak) and not gotten mentioned here on the site before -- namely that Disctrict 9 director Neill Blomkamp shot himself a lil' horror movie over the period of the pandemic (and pay no mind to me nudging towards the past tense there, since I really do mean "the ongoing pandemic that is still killing tons of people and which you should still have at the forefront of your mind and be taking every precaution about")! It's called Demonic and it's hitting theaters in August and our very first look at the film has dropped today, via EW. They have another image if you click over, along with Blomkamp talking the film a little bit. He says he self-financed it and was inspired by the Paranormal Activity films, and here's what we glean plot-wise:

"... a young woman unleashes terrifying demons when supernatural forces at the root of a decades old rift between mother and daughter are revealed. "The main character is a girl whose been estranged from her mother... During the course of the film she gets sort of reunited with her mother and we learn about some crazy back story that she wasn't aware of. I would say it has a crossover between science fiction and horror.""