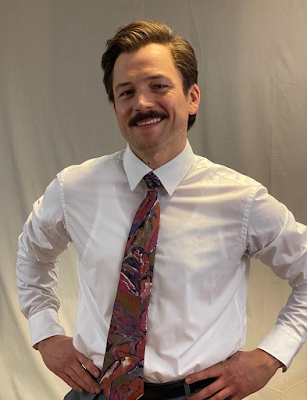 After a quick search I see now that I never did a post when it was first announced that Taron Egerton was making Tetris: The Movie, which isn't actually what I first feared when I heard that -- no, he is not voicing the T-shaped block as it heads out onto a wacky animated adventure. He's actually just starring in a biopic of Henk Rogers, the man who got the game onto gaming consoles back in the 80s, from his Kingsman director Matthew Vaughn. Anyway it's a shame I never did a post before, because I really missed out on the opportunity to make a crass joke about Taron's piece fitting right into my piece or whatever -- the world needs that! So thankfully today Taron posted this photo of himself in be-stached character on his Instagram, and re-gave me the chance. So here goes. Ahem. Are you ready? Here goes. Umm... yeah, I don't actually have any Tetris jokes. That's a shame. I keep thinking up good lines but when I try to make them fit in they just disappear.
Who? Jason Adams When? 3:18 PM

Gotta love that mustache on him