And Show a Further Sea 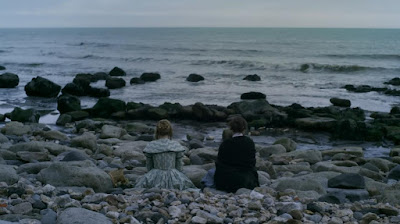 Mary Anning (Kate Winslet) spends her days fastidiously whittling down blocks of earth and stone to reveal the gorgeous curlicues of ancient life trapped within. Cephalopods and Nautilus, the spines and underbellies of once-upon soft-things long ago turned to glass -- here is a source of wonder. Mystery and past. The first sounds we hear in Francis Lee's Ammonite are of wetness -- in this case it's some floor-boards being scrubbed clean -- but we'll return again and again to the shore and its sounds, to the place where water does its own work of polishing old rough things down to a perfect glittering sheen. There's a hard beauty waiting for those willing to do some painstaking and intensive, focused work.
That's as much about the movie as anything, and it's the perfect setting and occupation for Lee's glorious introvert's love story -- his second glorious introvert's love story, it should be said. There might not be another filmmaker working today who understands better what it's like to find something wet and warm and terrifyingly invasive suddenly maneuvering its way deep down into the heart of a person who wasn't much looking for that particular invasion -- tremendous rock formations have been split to ruin by such weathering, and Lee sees the danger, the earthquake, of romance for us shy folk as crisp as science. 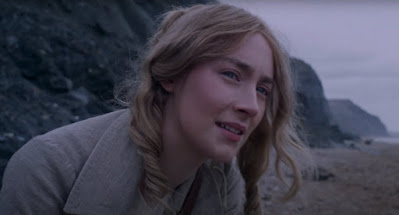 For Mary Anning it's the arrival nee intrusion of the high-class Charlotte (Saoirse Ronan), a delicate and winsome thing you might see folded and dried in a book between two pages -- her hair, lightly golden, tumbles about her like holiday ornamentation. Charlotte feels decorative -- a shift of lace on an armchair -- while Mary is elbow grease and washing her armpits at the kitchen table. And yet in each other's company they uncover common ground -- before you know it Charlotte's hems are muck heavy and brown, and the beach-shells Mary's glued to a cheap mirror for tourist tuppence are announcing themselves as something, something worth hanging on a wall instead. Beauty begins insisting upon itself once you have a reason to actually look for it. Fuck, it's everywhere.
Mary and Charlotte become each other's reasons, slowly and insidious, but Lee isn't okay with resting on those laurels, as nice as that sun might feel finally in our bones -- falling in love might make us want to be better people but it doesn't automatically do that work for us. Mary, trapped for so long under her thin scrim of brine, can't just upend her chosen life of solitude and splash off to the big city, and she might not even want to. There is being afraid of love on the one hand but there's also just who we are on the other -- the weather might wash us down to something pretty that could be hung up in a museum but the original mass, our buried substance, still has weight and matter and worth in itself.
Ammonite, like God's Own Country before it, knows deeply of the turbulent tug of the waves inside an introvert's heart -- the endless struggle to crack open our shells without killing ourselves in the process. We want and need to be known, but our personalities are stone set against it -- it takes time and it takes patience, uncovering those beautiful, buried things. But my god, when you do, watch out. 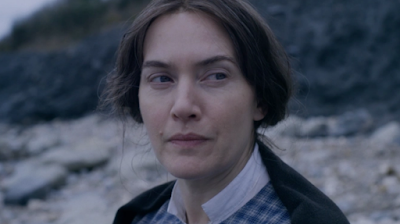 Getting kind of annoyed by all these straight critics constantly referring to queer movies as “cold”.

This movie is at an unfortunate disadvantage because it’s coming out in the shadow of the masterpiece Portrait of a Lady on Fire. Similarly Gods Own County was overshadowed by Call Me By Your Name, released in the same year. So many reviews I’ve read compare it to Portrait, which seems unfair. Other than being about queer women and taking place near a beach it’s a vastly different movie.

What a beautiful interpretation Jason. Now I appreciate the movie even more. Thank you.