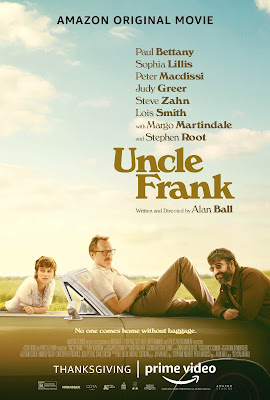 And speaking of True Blood slash Six Feet Under creator Alan Ball (I just mentioned how he was supposed to direct the Chippendales movie in my earlier post) here's what he has coming up -- it's called Uncle Frank and it stars Paul Bettany as a lit professor in the 70s whose country-fied niece (It star Sophia Lillis) comes to the big city to attend his college, where she uncovers, gasp, he's a queer.

The two then take off on a road-trip home for a funeral and bonds are made and broken and so forth. I literally just watched this movie last night! It's screening as part of NewFest, so I'll have more on it in a couple days. (I have previously posted a clip from the film, right here.) For now they've just released the trailer, and I dutifully share it with you, tender readers...

Amazon is releasing Uncle Frank (which also stars Judy Greer (who gets the film's funniest moment, of course), Steve Zahn, Margo Martindale, Peter Macdissi, Stephen Root, and Lois Smith) on November 25th and that's super perfect timing -- it's totally a Thanksgiving movie even though there's no Thanksgiving in it. Awkward family reunion type movies are always perfect for that holiday.

Who is the bearded hottie liplocking with Paul Bettany in your gif?