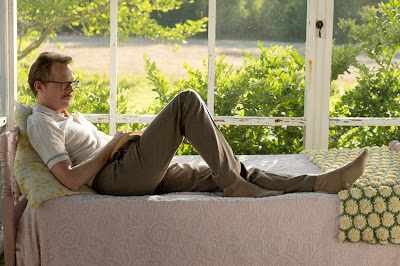 I don't know about you but I admit my ears perked up when I read that there was a movie forthcoming that had Paul Bettany playing a prominently mustachioed gay uncle in 1973 -- was that my ears? Something perked. Anyway I was onboard. And the photo above, the first from the film -- which is called Uncle Frank and was written and directed by Six Feet Under creator Alan Ball -- proved that instinct correct.

As does the first clip from the movie, which also stars Little Women's Sophia Lillis as the person calling Uncle Frank "Uncle" -- she plays his niece and yadda yadda I'll let the official plot detail do the detailing:

"In 1973, teenaged Beth Bledsoe (Sophia Lillis) leaves her rural Southern hometown to study at New York University where her beloved Uncle Frank (Paul Bettany) is a revered literature professor. She soon discovers that Frank is gay, and living with his longtime partner Walid “Wally” Nadeem (Peter Macdissi) -- an arrangement that he has kept secret for years. After the sudden death of Frank's father -- Beth’s grandfather -- Frank is forced to reluctantly return home for the funeral with Beth in tow, and to finally face a long-buried trauma that he has spent his entire adult life running away from."

This all sounds terribly up my alley.
I bet there will be bookshelves! Here's that first clip:


Uncle Frank premieres on Amazon on Thanksgiving.
I'll clearly share the full trailer when that appears, too.
.
Who? Jason Adams When? 12:38 PM