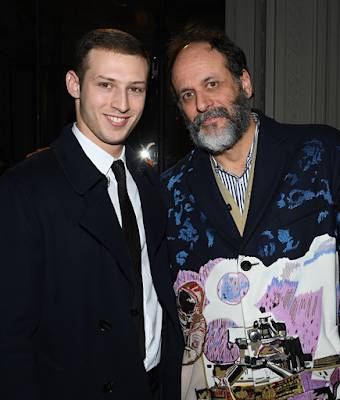 Now that Luca Guadagnino is done hanging out with Synonyms stud Tom Mercier in Paris for their Fashion Week -- Mercier stars in Luca's forthcoming HBO series We Are What We Are, talked about previously here -- he's headed over to Sundance for a doc about truffle farmers that he produced (sure why not). Deadline chatted with him there (thx Mac) and asked him what he's planning on this year, and he came up with lots:

"“I’m putting all my focus and concentration into We Are Who We Are and Born To Be Murdered,” he says. He is producing the latter, a Greece-set thriller about a vacationing couple, played by John David Washington and Alicia Vikander, who fall trap to a violent conspiracy. “I’m very enthusiastic about the film. It’s going to be a wonderful, passionate surprise.”

The Suspiria and I Am Love director says a busy schedule has left less time for writing over the past two years, but that the sequel to Call Me By Your Name remains on the agenda. “I’ve spoken about my ideas to Timothée [Chalamet] and Armie [Hammer] and we’re all eager.”

Blood On The Tracks, a project inspired by Bob Dylan’s seminal 1975 album, and Warner Bros’ Lord Of The Flies update, are two of the movies that could come together in 2020, he says. The writing process is starting on the latter, and the former is still being put together, he explains.


I previously posted about that Born To Be Murdered project right here -- this is being directed by Luca's partner Ferdinando Cito Filomarino, who's also a director. And you can read my post on Luca's possible Lord of the Flies movie here. Hey speaking of Luca & Flies remember all of the flies in Call Me By Your Name?

There was a fly in that scene that that gif doesn't get across, you'll just have to believe me. (Nobody's thinking about flies anymore, are they?) Anyway I was just recently saying (here) that I'd embraced my status as one of the last true believers that a CMBYN sequel would still happen so it's good to see I share that space with, you know, the director himself.
.
Who? Jason Adams When? 11:34 AM
Labels: Anatomy IN a Scene, Armie Hammer, Call Me By Your Name, gratuitous, John David Washington, Luca Guadagnino, Timothée Chalamet, Tom Mercier

If the CMBYN sequel in any way resembles the god-awful book, count me out. That first book and movie is perfect and shouldn't be weakened by a dreadful sequel.