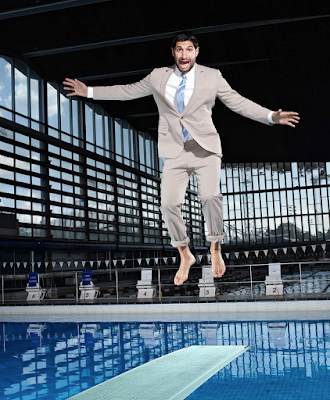 FX has announced their premiere dates for the new seasons of two of my most favorite television shows -- the vampire comedy What We Do in the Shadows (starring our boy Kayvan Novak seen above) is returning for its second season on Wednesday April 15th, while the fourth season of Noah Hawley's Fargo drops its first episode four days later that Sunday, April 19th. For lots and I mean lots more of Kayvan click here -- checking his IMDb page why the hell hasn't he gotten any big roles in anything yet? I demand more Kayvan, world! And to read more about the next season of Fargo click here -- BEN WHISHAW, THE END. But while we're on the subject of FX...
.
.
... that there is the first full trailer for Devs, FX's new eight episode limited series from Annihilation and Ex Machina director Alex Garland, which they say premieres on March 5th. Obviously this seems to be nodding towards the futuristic technological concerns of both of those films, as well as their smashingly golden and gorgeous visuals, but they had me on board the minute that cast was announced. And by "that cast" clearly I mean "Karl Glusman."