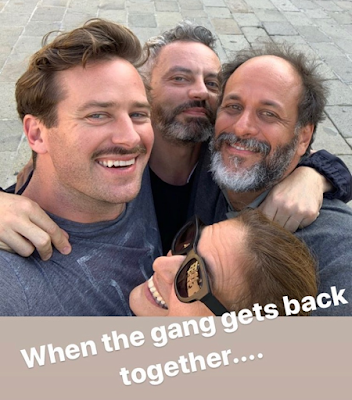 I know it's still early to declare such things but unless Tom Hardy is caught skinny-dipping on the set of the new season of Taboo like he did that first time then I have to think there won't be a picture I enjoy more today than this shot of Armie Hammer (with a mustache!) reunited with his Call Me By Your Name director Luca Guadagnino via his Insta.

Armie didn't tag the other two people but I think the woman at the bottom is CMBYN's casting director Stella Rossa Savino -- her Insta was a great source of behind-the-scenes stuff during CMBYN's production; as for the bearded bguy in the middle I feel like I should definitely know I should know who that is, but I'm not sure. Anybody know? I thought it might have been Luca's partner Ferdinando Cito (I can never remember what he looks like) but after a google it is not.

Anyway Armie is either rocking that mustache for the remake of Rebecca directed by Ben Wheatley, which just finished filming -- he's playing Olivier's role and Olivier had quite the stache in Hitchcock's original film -- or the stache is for Kenneth Branagh's remake of Death on the Nile, and I tend to favor the latter being the truth. We already know how integral Branagh sees facial hair to that franchise thanks to that unsightly beast, really more of a living flailing mink, that he himself wore on his face in his 2017 version of Murder on the Orient Express.
.
Who? Jason Adams When? 10:38 AM

What is my main SQUEEZE, Mark Ruffalo doing hanging out with these guys??? and I didn't get invited (sad face).

That is not Mark Ruffalo

I just read Find Me. It doesn't live up to expectations, more like a melodrama disguised as an intimate love story. I'm not sure if Aciman is writing for the screen as he was in CMBYN just for the sheer love of a strong narrative. Disappointing to say the least. I just hope the screen adaptation would be much better.