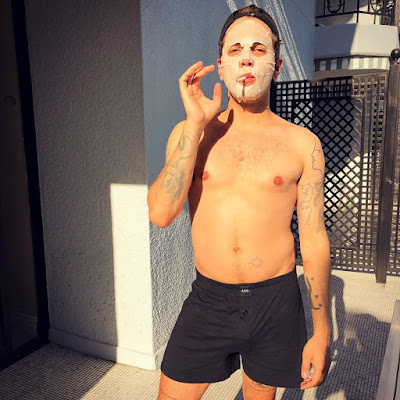 It's practically a crime to share this picture of Xavier Dolan without sharing his Instagram caption, which was "Goodnight, Mommy" -- a reference to the masterful 2014 Austrian horror movie Goodnight Mommy by directors Severin Fiala and Veronika Franz (here's my review) of course, which has the "Mommy" in question buried beneath a creepy face of bandages. But it sort of works on another level since this is Xavier Dolan, director of a film called Mommy right? Mommy Movies stick together! And now I'm imagining some sort of mash-up between Mommy and Goodnight Mommy and... it's actually not that hard to imagine, ya know?

Anyway both Severin Fiala & Veronika Franz as well as Xavier Dolan have their hands in American Horror Movies this year -- the former directing duo have The Lodge coming out in November, which stars Riley Keough and feels very much in spirit with their earlier film (an unfamiliar mother figure trapped in a house with two children); watch the trailer here. And Dolan has an acting role -- and a pretty vital one at that, if you're gay and a fan of the book anyway -- the second chapter of the adaptation of Stephen King's It. That movie is out in theaters tonight! I am seeing it -- that is to say It -- tomorrow. Anybody excited?
.
Who? Jason Adams When? 10:10 AM