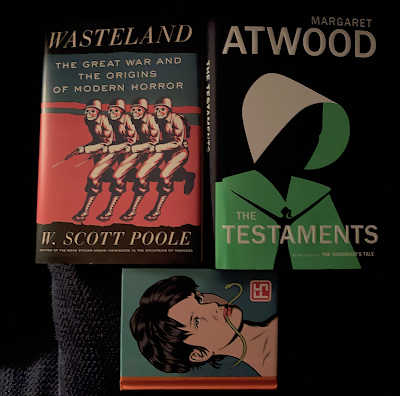 Twas a red letter night at the post-box when I got home from a movie screening last night and found those three beauties waiting for me -- I've been meaning to read W. Scott Poole's book on the birth of modern horror for quite some time now so that one was overdue; Charles Burns' new collection of sketches called Free Shit (drawn from his same titled zine) on the other hand was right on time. (See more pictures of the latter here.)

And then, sort of analogous to a "Three Bears" situation I guess, we have the third option -- Margaret Atwood's The Testaments came to me way too early! That book isn't out until next week but due to a big snafu on Amazon's part some customers, of which I was one, got sent the book a full seven days before its proper publication date.
.

Not a mix-up. It was a deliberate move by Amazon, a middle finger to every other retailer playing by the rules. 😑Amazon broke an international, binding contract and shipped a strictly embargoed title a week before they were legally permitted. Check out our timeline for more.
— Avid Bookshop (@AvidBookshop) September 4, 2019

.
As you see I took my excitement over that one to Twitter, where some Independent Bookstores are rightfully expressing their outrage -- I get it and I empathize! Support your local bookstores! I spend tons of money at ones around New York, I just had Amazon gift card money from my birthday to spend and this sudden influx of books here were the delayed result of that. If it sounds like I'm making excuses... I am. I am totally afraid of librarians! I am good friends with a couple of librarians and they are intense. Don't come for me, Bibliophiles! I am one of you!