Even if Terence Malick's new film A Hidden Life hadn't gotten raves when it premiered at Cannes earlier this year I still would've been excited about it -- I was excited about it before those raves, although somewhat hesitantly -- because of the cast he'd gathered up. When Matthias Schoenaerts was cast we were immediately on board -- although that gif above is literally Matthias' only moment in the just dropped trailer (we'd recognize that nose anywhere), which makes us wonder how substantial his role might be -- but besides that there's August Diehl and Alexander Fehling and Franz Rogowski and Bruno Ganz and Jürgen Prochnow and Michael Nyqvist, all names that perk us right up.

But great casts are things Malick's gotten good at wasting -- hell I haven't even bothered watching any of his films in full since The Tree of Life, a film I wouldn't call myself a fan of by any stretch of the imagination. He can get any actor he wants still -- what makes A Hidden Life different? Well watching the trailer now I count two things. One, he's shooting the Austrian mountainsides, aka my favorite landscapes there are in all of the world, and if there's one thing Malick's maintained even through his thinner moments it's astonishing travelogue prettiness.

The other thing is it feels like he's got a plot for a change. There is real actual tension in the just-released trailer -- it's not (just) spinning in wheat fields and stern mothers banging soup spoons from inside a fish-eye lens; this movie looks like it has something to say besides yadda yadda spiritual nonsense I don't traffic in. Oh I'm sure that element's involved since it's about a conscientious objector to violence coming up against the Nazi regime, but that's a thing I can wrangle with on practical terms. It doesn't insist I the viewer be or become a spiritual person, like his other movies have felt so insistent on without giving me anything else to get ahold of. Anyway here's the trailer, decide for your own damn selves:
.
.

A Hidden Life is out on December 13th. Do we
think Malick might catch the Oscars' fickle eye?
ETA oh and here's the very pretty poster: 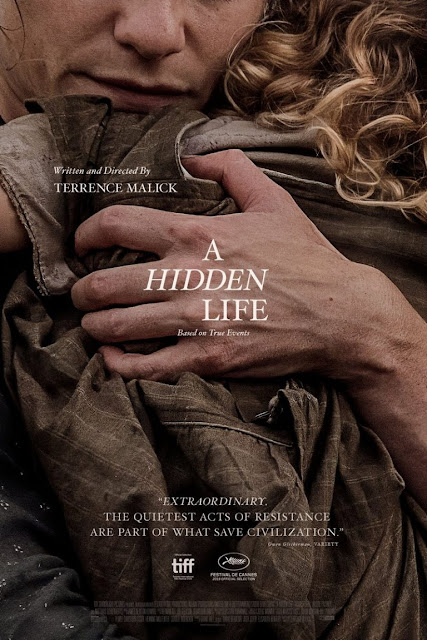 His films have become unwatchable.