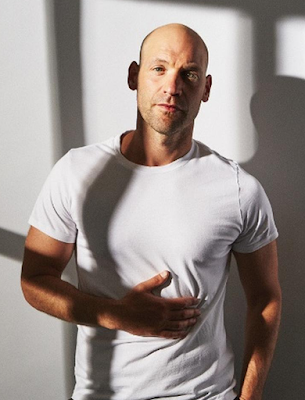 They say patience is a virtue and so I must be the most virtuous piece of shit in the world, given how patient I have been waiting for Corey Stoll to take off. But the next couple of years and thereabouts finally looks to be our long-awaited reward -- we already told you that he's going to co-star  in Steven Soderbergh's film The Report as well as in the Sopranos prequel opposite Alessandro Nivola and well as in Ryan Murphy's Nurse Ratched miniseries for Netflix.

Well today there's even more -- he's going to play "Lieutenant Schrank, the New York City detective charged with quelling civic unrest in his racially-torn precinct" in Steven Spielberg's West Side Story remake! This role was played by Simon Oakland in the original -- I've only seen the original WSS once and I wasn't nuts about it. I know, I know, send your hate mail to me care of my butt. But I'm perfectly open and willing to watch a Steven Spielberg musical -- written by Tony Kushner for god's sake! -- and Corey Stoll singing at me is making it even easier a pill.
.
.
Also joining the cast today is Brian dʼArcy James as another cop, "Sergeant Krupke, a veteran cop whose beat includes the territories of two warring street gangs, the Sharks and the Jets." Don't ask me to remember anything about the cops in the original, but the name "Sergeant Krupke" has infiltrated pop culture enough that it sounds familiar to me. Which is the bigger part?
.
Who? Jason Adams When? 2:18 PM

Krumpke is the bigger part and from my memory, neither of them sing.

I admit I've never the original stage play, and the movie did make significant changes so possibly it's different. At least in the movie, while neither is a singing role, Schrank is by far the bigger part. Schrank is the veteran plain clothes detective who does most of the interaction with the kids. Krupke is just the big beat cop who's job is mostly to stand there in a uniform w/nightstick and look threatening. It's barely a speaking part-heck, the actor who played the role in the movie doesn't even have an IMDB photo. The only reason you recognize the name more is because of the "Gee, Officer Krupke" number the kids sing.

However, there's no way they are hiring someone with the Broadway cred of Brian D'Arcy James to just stand around-they must be beefing up the part for him.