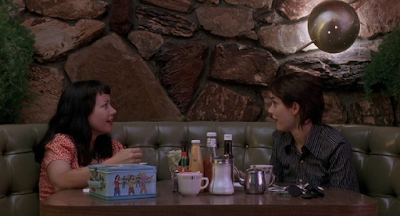 Vickie: You don't understand. Every day, all day, it's all that I think about, OK? Every time I sneeze, it's like I'm four sneezes away from the hospice, and it's like it's not even happening to me. It's like I'm watching it on some crappy show like Melrose Place or some shit, right? And I'm the new character, I'm the HIV-AIDS character, and I live in the building and I teach everybody that it's OK to be near me, it's OK to talk to me, and then I die. And there's everybody at my funeral wearing halter tops or chokers or some shit like that.
Lelaina: Vickie stop, OK? Just stop.
You're freaking out. And you know what?
You're gonna have to deal with the results.
Whatever they are, we're gonna have to deal with
them just like we've dealt with everything else.
Vickie: This isn't like everything else.
Lelaina: I know that, all right? But it's gonna be OK,
you know? I know it's gonna be OK.
Melrose Place is a really good show.

I just noticed that the "voice of a generation" Reality Bites is turning 25 a week from today, and since I'm not going to be here a week from today it seemed a good idea to wish the movie a happy 25 now, while I am here. (PS I will be off-line both Friday & Monday, so adjust yourselves accordingly.) So happy 25, Reality Bites! This remains the best thing Ben Stiller has directed -- yes it's better than Tropic Thunder and The Cable Guy. Well maybe it's not better than the "Legend of T.J. O'Pootertoot," skit on The Ben Stiller Show, but that's a close one.
.
.
I suppose I might be biased about Reality Bites since I was a junior in high school when it came out and it was perfectly timed to shape (read: warp) my idea about imminent adulthood, or thereabouts -- it does certainly have its faults, both of them squarely aimed at Winona Ryder's love interests; Ethan Hawke's "Troy" was unbearably smug in every single frame from where I stood, even back then, and Ben Stiller himself gives a sort of flat and lifeless performance as "Michael." He should've just focused on directing, I think. 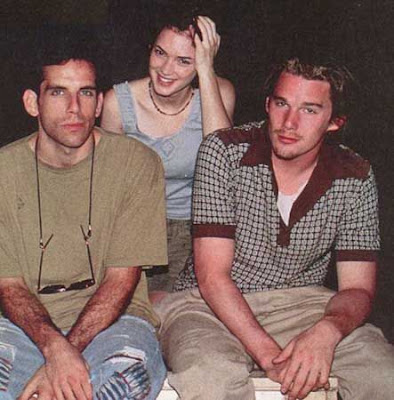 online survey
.
But I love everything having to do with Winona & Janeane & especially the adorable and relentlessly underrated Steve Zahn, whose coming out sequence (which I've posted about previously) was indispensable to this closeted teen. Turn up The Knack and tell me what are your thoughts or memories on Reality Bites? 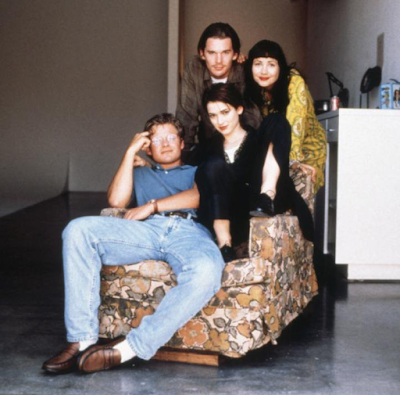