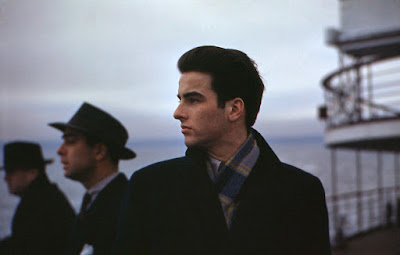 Montgomery Clift didn't make a movie until he was nearly thirty years old. It wasn't that he wasn't acting before that - he debuted on the stage at the tender age of fifteen. It was just that he was picky - Monty wanted to be wanted, and he wanted to be in control of it. The transfixing new documentary Making Montgomery Clift (directed by Clift's nephew Robert and closing NewFest tonight) argues that those were the primary forces in his life - not the misery of the closet and not his alcoholism, but his strong sense of self-determination and his boundless love for his work.

The film seeks to shove aside all of the agendas that've been piled on top of the star, the legend, the symbol of so many sad stories, and discover the man, the artist, underneath. Which is exactly what kept Monty out of Hollywood all those early years - he didn't want to play that game, or be the thing they wanted him to be. He didn't want to romance some random starlet or secretary, forced by a studio-head into an arranged spectacle of flirtatious bullshit. He wanted to do his work on his time, under his own set of rules.

He wished to be the maker of his own Monty - Hollywood and eventually the public would have their own way with him of course, and over the years the biographies about him have whittled his complicated personhood down into an easily digestible, and useful, tale. The self-hating mama's boy swallowed up and spat out by his own narcissism. Poisoned by the closet and self-imposed loneliness, too demanding of himself and others, disgusted by what he saw in the mirror...

The list goes on and on, but it's not the person the doc presents - from the family archives we see footage of a happy man swimming in the surf, and we hear audio tapes of a genuine goofball. Nephew Robert's father fancied himself the keeper of True Monty, saving rooms full of memorabilia and photos, scrapbooks of several billion microseconds, and the film really does feel like a proper rebuilding up of a human being. Not a symbol, but a brother, a son, and some guy with a real nice face who liked to play-act and hey, he turned out to be real good at it.

Making Montgomery Clift is now the foremost resource on the star, and everything that comes next is going to have to reckon with it. Everyone who wants to reckon with Clift will have to view him through the lens put forth by this film. There's a moment late in it where the prospective bio-pics of the actor, of which there have been dozens over the years, are brought up, and they suddenly by that point seem not like a treat but more like a threat - to whittle Monty down to a self-immolating closet-case again would now seem unjust after spending time with the curious and funny man presented here. It would end up akin to what Bohemian Rhapsody, that blasphemy, just did with Freddie Mercury - sour something special by imposing extraneous narratives to suit outside agendas. Let's start doing our stars justice and, like Making Montgomery Clift does, just treat them as people. And who knows, perhaps the empathy could spread.

Agree completely with your review. His biographers (particularly Bosworth) come across as half baked Freudian wanna be analysts. Hope this gets a wide release.

Great review. This documentary is so refreshing, and encourages you to question the old tropes about more than a few celebrities.