Because You Don't Know What It Means To Me 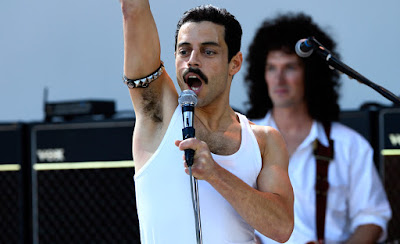 I'm willing to bet that Freddie Mercury, for all his damage, and the boy had damage, had some fun in his life. Don't you think? He was by all accounts difficult, fucked up by the closet, a tremendous drug enthusiast. But the dude partied with groovy people and I just have my doubts that his every moment of partying was a lonesome woe, a misery. You wouldn't guess that watching Bryan Singer's Bohemian Rhapsody though, which treats his every second not spent in the studio or on stage with his "band family" (including the "love of his life" Mary Austin) as a drudge of desolation, exploitation, inextricably linking his gayness with his downfall in some "Chick Tract" type morality play nonsense, the leather-jacketed mustache queers whispering poison in the poor doomed doe's ear and finding him a swift death.

Is there truth in the telling that Mercury did get ensnarled with a lousy dude named Paul Prenter (played here by Allen Leech of Downton Abbey) who hooked him up with drugs and boys and isolated him from good decision-making, only to betray him later on? There very much is. But there is presumably also a way to tell that story without projecting a forty-year-old antiquated stance on homosexuality as truth - we've come a long way from how Freddie Mercury felt about himself, baby. Bohemian Rhapsody presents Prenter as a snug-panted serpent slithering into an Arena Rock Garden of Eden - he practically hisses every time they cut to him - and besides absolving Mercury of all responsibility for his lousy behavior the film time and again links shady gayness with seediness, meanness, and eventually disease.

The film feels like an artifact from the 1970s and 80s, and I don't mean in a well-captured time-capsule way - its point-of-view feels moth-balled and deeply offensive here in 2018. The storytelling seems to buy Mercury's closet-bred insistence that True Love was for the Beautiful Blonde Lady alone while sex, sex with men, must remain dirty and hidden - we get a couple of quick kisses and some skulking around a truck-stop restroom beside a flouncy butch, but only once Freddie is good and sick and soundly tragedized can a man come along for him. Nevermind that in real life Mercury met and lived with Jim Hutton before he even got diagnosed with HIV - here Hutton's presented as a sexless afterthought, a balm applied to a soundly dying man.

Is there good stuff to be had in Bohemian Rhapsody? Sure. The spectacular music of Queen is there, after all. If you're gonna see the movie see it loud, with a good vibrating sound system in your seat - something should get you stiff, anyway. The concert scenes can be heaps of fun (Malek struts real well) and the remaining members of the band clearly knew the right story to tell when it was about the four of them in a room figuring out wacky noises and acapellas to drop on their immortal rock anthems. The Live Aid sequence is some killer queening indeed. But the rest of the film relentlessly poisons all around it - a black green cloud of bad stuff snorted up its own fat bottom. Freddie deserved better. 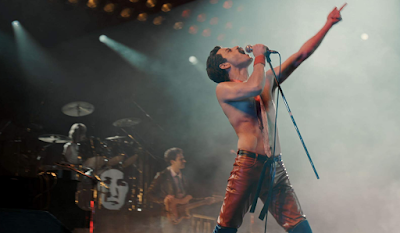 This is such a disappointment. I was really looking forward to this film (the trailer is amazing), and now I don't know if I want to see it. It's starting to sound like what we heard about Stonewall - "Don't judge it til you see it!" "I promise that the people and events are faithfully represented!" - and then we saw it and it was a whitewashed mess whose central theme was gay men are predatory creeps who molest poor cis young gay twinks who only want to find a normal guy to love and occasionally throw a few bricks.

I thought Bryan Singer got fired for being, well, Bryan Singer. How is he the final credited director?

I think he'd directed enough by the point he got fired that they had to give him the credit, but I doubt we'll ever hear the entire story of that nonsense. Anyway it seems inexplicable that a gay man could direct a movie this homophobic but, well, Bryan Singer.

so, literally, the boys in the band?

Damn! I was looking forward to this! UK critics are agreeing with much of what you have said, and the Guardian commenting:
A few weeks ago, I wrote that my benchmark for a Mercury biopic would be a re-creation of Queen’s legendary 1977 launch party in New Orleans, featuring naked waiters, contortionists, drag queens and dwarves with platters of cocaine on their heads. This being a 12A/PG13 certificate, no such rock excess is on offer, leaving only a few kisses and gropes and the odd reference to being “high” to suggest Mercury’s wild party lifestyle. That and the moralistic sneering.
That’s the Freddie we all thought about when he died, and at least we felt he’d really enjoyed himself when he was alive. In the UK anyway, to quote Mouse in the Tales of the City books, he was one of those men that straight men could be gay for :-). I’m not a massive Queen fan but he was an icon and this sounds like a travesty.

This is both not disappointing, as I've been side-eyeing this movie since the trailer dropped, and massively disappointing, since Freddie deserves so much better.

I'm watching some videos of him performing live to make up for it.

This is about what I expected but still incredibly disappointing and heartbreaking. :(

The movie feels like a batching of Freddie's memory, true, but its still a great movie overall. If it wasn't based on queen, and it was pure fiction about an imaginary band, it would be pure gold to everyone. There isn't many homophobic elements in the movie, besides the scripted bits of characters being bigots which doesn't happen very much. Just because it isn't completely true to Freddie doesn't make it a bad movie.