Been Around the World & I I I Found My Baby 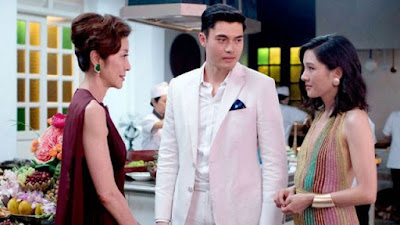 What is Romance anyway? How would you define it? I'm not precisely Don Juan himself typing here so maybe I shouldn't be the one to answer this question but I do think I can say with some certainty, after all these many years of making love love out of nothing at all that a necessary ingredient to Romance is the ability to be silly. To be big, broad, and open-hearted - sincere. Grand gestures - declarations on blimps - aren't the be all end all but you should certainly at one moment or another be able to stand up tall and proud and, with a bucket of roses or a room full of balloons or a single finger pressed to the precise right place, openly and happily express your enthusiasm for the object of your affection.

Crazy Rich Asians, bless its big broad and goofy heart, gets that. I'm not really surprised that the film's gotten some flack here and there in its reviews for its materialist extravagances - I had my moments where I was like, "Okay maybe that was a little much, guys" - but we do need these fantasies. I sure hope I wouldn't have been one of the scolds who gawked at Barbara Stanwyck's boat-rides and ball-gowns with a Depression-weary side-eye; escapism is not the only goal of film as some folks argue but it can certainly be a good goal, and the rom-com is where it works best. Because of Romance and its temporary blinders - because to love, at first and then sporadically ever after, is to be swept up up and away on a river of champagne bubbles inside your heart. A good rom-com should sustain that sensation of blissful ignorance from credits to credits, and Crazy Rich Asians is a great rom-com, full of bubbles and bliss. 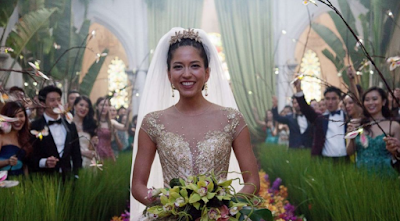 And, did I mention, beauty? Beautiful people, beautiful things. Beauty so beautiful it spills into sickening at times, as the best beauty does - the faces, the abs, the places, the abs, the fabrics that you want to reach out and stroke and hopefully get a touch of the abs underneath as a bonus. Constance Wu and Henry Golding are just great big buckets of charm, with smiles so blinding they bring to mind the glint of sunrise off a lear jet. You fall for them, as you must, and their love, as you must, and so you root root root for them against the tide of literal fish guts they get thrown at them, mussing their million thread count bed-linens in a ghastly true crime against true beauty that only Divine himself could have foreseen.

Also flying at them, with less splatter than those innards but as much ill intention all the same, is the matriarch Michelle Yeoh, and you know she can fly with the best of them, precise as Cupid's cloak and dagger. Yeoh shows up serious as a heart-attack in the middle of a dance party, not gonna play, and then she leaves you hanging, hanging, hanging, waiting for that shoe to drop, and when it does that shit is timed like gangbusters - you don't even see her holding your still beating heart in her hand, so genuine seemed her smile. It's a trapeze act of a performance, juggling chainsaws over an open pit of fire and never once breaking a sweat, and she sticks the damned landing. Come for the punchlines care of Awkwafina (a breakout riot of a sidekick performance) and for the sweet caress of beautiful men proposing on the white sands of paradise, but you stay for Yeoh, forever Yeoh.
.
Who? Jason Adams When? 1:52 PM