The Moment I Fell For... Andrea Riseborough 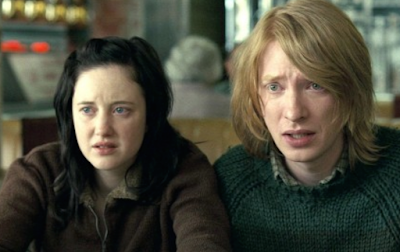 Looking back now I see that I make no mention of Andrea Riseborough's small role in Mark Romanek's 2010 film Never Let Me Go (weird that this is the second time this movie has come up this week; I guess it's due for a re-watch) in my review of that movie, but I vividly remember her and Domhnall Gleeson striking me - these are gonna be somebodies, I thought. Riseborough had already been in Mike Leigh's Happy Go Lucky at that point, although I don't remember that film well enough to remember her in it.

Anyway the next year Riseborough became somebody, to me anyway, in the most unlikely of places - she gave a tremendous performance as Wallis Simpson in Madonna's awful 2011 film W.E., making that morally dubious film impossible to entirely ignore as much as one might want to. And from there on every movie she appeared in was made better by her presence, and I'd go out of my way to see things for her.

It's easy to pretend that Joseph Kosinski's Oblivion is entirely an Andrea Riseborough Film, even with Tom Cruise there running and screaming and running and screaming - by this time I was already regularly singling her out for boundless praise in my reviews - and she might have been the single thing in Birdman I wanted more of.

But by this time last year when she was popping out of all of two minutes of Tom Ford's Nocturnal Animals, the single most joyous and boisterous thing in that dour but beautiful movie,  I was past being ready for more - I was angry. Give this woman her damned due already, Hollywood! 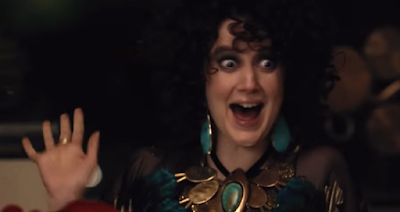 This past year might have been the one where that feeling of Not Enough finally got felt by enough people, I think. Her performance as Billie Jean King's hairdresser turned lovah in Battle of the Sexes was another classic from her, full of all the life and vigor that those of us who've been paying attention expect from her on screen. The romance that she and Emma Stone captured made that movie work - their every scene together was sexy and memorable...

... and once again Riseborough seemed, even to a person who's been paying attention all this time, like a totally different person. I don't know how she does it, but she surprises me every damn time. I finally got to see her in person at a Q&A for Battle of the Sexes this past year and she even surprised me in person, as herself.
.

.
I still have no idea who this woman is after all of these years, and I cherish that. I think Battle of the Sexes might represent a turning point in her career, but then just a couple of weeks ago we got a reminder of what Andrea's capable of, of the U-turns that she still manages effortlessly, with her absolutely brutal performance in the new Black Mirror episode called "Crocodile," which is the sort of thing that makes people cross the street when they recognize the person they'd seen doing those things she does in this. 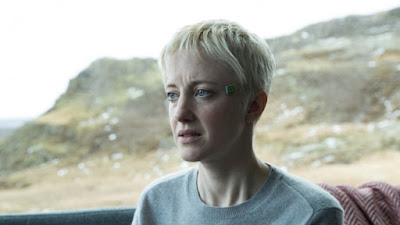 I won't go into specifics of the John Hillcoat directed episode because I know some of you have maybe not seen it yet but it's an exceedingly dark hour of TV, maybe even excessively dark, although the fact that it's female-led gives me pause on that charge because we don't usually get to see a woman behave THIS badly and Riseborough's typically go-for-broke and that is a gift, a gift to savor.

Anyway I bring all of this up because Variety put an interview with the actress up yesterday wherein they discuss the FOUR films she's premiering at Sundance this month. Here's Variety on them:

"There’s “The Death of Stalin,” a savage political satire from “Veep” creator Armando Iannucci, in which Riseborough plays Josef Stalin’s daughter. Then she stars opposite Nicolas Cage in “Mandy,” a gonzo thriller that combines romance, carnage, and supernatural creatures. Riseborough also appears in “Burden,” a drama about a man’s break with the Ku Klux Klan that also stars Forest Whitaker and Garrett Hedlund. Lastly, she headlines and co-produces “Nancy,” the story of a disturbed woman who becomes convinced she’s an elderly couple’s long-lost child."


(Sidenote: I posted a picture of Hedlund in Burden on the Tumblr earlier this week.) You can read the entire chat here. I hope one or all of these movies are good great movies and I look forward to them but no matter what I'm about 99% sure that Andrea Riseborough will be great and totally captivating in every one. It's what she does. 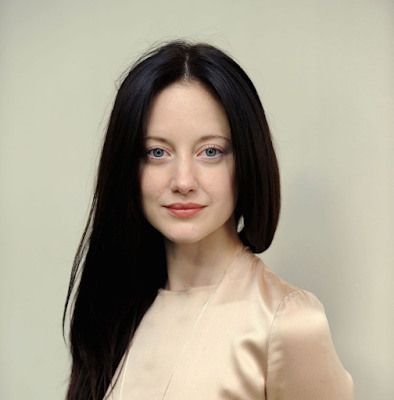 What's your favorite performance of hers so far?
.
Who? Jason Adams When? 12:51 PM

I just saw her act in tha Black Mirror episode for the first time, and I'm in love honestly. That was definitely the best episode of season 4 by far, thanks partly to her and Kiran Sonia Sawar's excellent performances.

If Ryan Murphy still needs someone to play Princess Diana in Feud season 2, Andrea's his Diana.

Oblivion. She's always excellent, but to me that was a special performance. I could watch that movie again and again, just for her.

Her range always impresses me, too (from Party Animals to Black Mirror, from Never Let Me Go to Oblivion, etc.).

british tv was my introduction to her: first playing an ambitious intern in the one season wonder 'party animals' and a year later in the telemovie 'long walk to finchley', playing margaret thatcher at the beginning of her political career and when she managed to make that [redacted] sympathetic i knew she was one to watch

I'm so glad she seems to be breaking through finally. You're right, she always surprises, she always finds something new. I love how committed and fearless she seems to be.
Her role in Happy-Go-Lucky is tiny, she barely has 3 lines right at the start of the film, but if you watch it back, you can see her giving it her everything to deliver a fully rounded character piece.

She was also EXCELLENT in a BBC production (i think it was BBC) of Witness for the prosecution based on Agatha Christie's short novel and she played the same character Marlene Dietrich did a long time ago.

I didn't know who she was when I saw Birdman but after that hallway scene with Keaton I wanted more of her. BOTS definitely delivered on that for me.

I've liked her since Party Animals with Matt Smith. She reminds me a lot of Kerry Bishe too.