You know what the world needs right now? If you said "love sweet love" you're a goddamn hippie, but you're not too far out of bounds. The word "crowd-pleaser" has been lobbed at Battle of the Sexes already and lots more than once, and it's a solid call - like the best Sports Movies this one, which tells the story of tennis legend Billie Jean King's infamous 1972 match with the washed-up Bobby Riggs, is going to make the audience you're sitting with clap and cheer once that final reel rolls along.

But the movie's both better, and a little worse, than just that. On the one hand it's a really lovely love story, and my favorite scenes by far are the ones where Billie Jean (Emma Stone, truly firing on all cylinders) gets to know the hairdresser, flung out of space, who's awakened all kinds of feelings she hadn't been expecting (played a dreamy soft Andrea Riseborough, who once again proves that she will always be the best thing in any given movie while simultaneously elevating everything around her). Their chemistry is so palpable that the film introduced a mustachioed Mike Vogel to come between them and I actually really wanted him outta there! (And since it's a literally blink and you'll miss him cameo the movie clearly agreed - Vogel 's not even credited! The only clue I have that it was him is this link.)

That said with pleasing the crowds you've sometimes got to sand the edges for mass consumption (just maybe don't ask Darren Aronofsky about that specific topic this week) and so Steve Carell hamming it up tends to drag on a few seconds too long every time (although given who the real-life Bobby Riggs really was perhaps exhaustion with his antics was the only way to really play those scenes). And there are probably maybe too many characters rattling around in this thing, but who would I give up? Certainly not Sarah Silverman's cigarette-snapping Phyllis-Diller-ian hairdo on legs. And certainly not Elisabeth Shue radiating rich Californian sunshine in every frame. 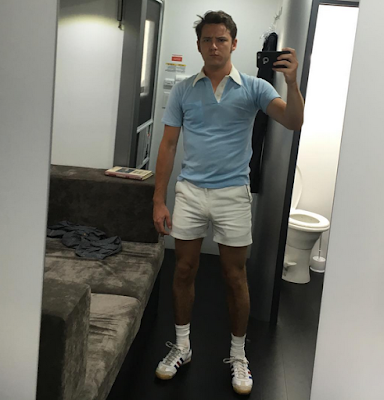 And certainly not Lewis Pullman, who plays Carell's sweetly disappointed son Larry in a series of lovingly photographed yet always surprising, time after time, demonstrations of how to correctly fill out this strange era's strange snug fashions, as demonstrated perfectly above in them tennis shorts (via).

But oh wait, I do know who I could've done without. Because with sanded edges comes a spoon-fed "Magical Homo" character like the one Alan Cumming plays. And yes I know that tennis dress designer Ted Tinling was a real dude and was very much involved in the events, probably exactly as depicted  - he was a close friend of BJK's and she's happy with the movie so if it rings true to her who am I to complain? It's just his final scene in the film, delivering a message of long-distance hope for the future, read on-screen to my eyes and ears, verisimilitude be damned, as forced and false - the sort of thing students of cinema future will look back upon with a cringe; an It Gets Better era Stepin Fetchit.

So the movie gets the love, the sweet love, right, but it could probably have used a little more of the hard fight ahead burned into its DNA - it ends bittersweet but I really needed just a tad bit more taste of that bitter on my tongue as I walked out the door. It was a long road ahead for Billie Jean, and as she tread first so tread we all still today.
.

This looks good, i hope to see it on Sunday. I was a baby when the Story takes place

Great write up! I was looking forward to the film but loved it much more than I expected to. Stone is aces and the ensemble is quirky and fun (it was delightful to see Shue again). Also thumbs up to Mary Zophres on-point costume design!