The End Is Sigh 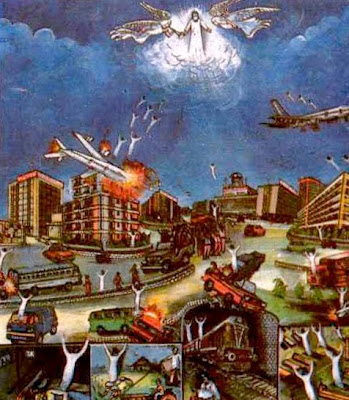 I was raised to believe that the world was going to end any day now. That the Rapture was on its way, set to suck all the good people right up out of their sneakers and into the light. The spectacle of it all (which keeps that Left Behind series fueled) was always impressive. The planes falling from the sky, the buses toppling over on the freeways, their drivers having been Christians who vanished behind the wheel of course. The skyscrapers engulfed in flames. It was all big and visceral and horrific, like the world's most pious Danny Boyle movie.

I think, in a sick way, these images bring a lot of Christians hope. The bad people will get their comeuppance. All that we'd sacrificed to keep ourselves Christian - the repression of so so many sinful desires - would not only be rewarded to us, but with a giant spectacle of bloody retribution at that! We'd be floating on a cloud in brand new soft cotton shifts while the sinners wailed bloody in the streets, forsaken.

And people wonder why I got into horror. God made me do it! But this fixation on The End of Times did something else for me - for a good long while, and it's something I still struggle with and probably will for all my life - it filled me with hopelessness. Like a vacuum pulling from the inside of my gut. My grades stumbled in Junior High School, when I was most heavily involved in the church and I had the people I loved, the people I most trusted, telling me every day that the world was going to end tomorrow or the day after that or the day after that. That this world's a foul and cursed place and the things of it, the worldly things, are not to be embraced. They are to be rejected. There seemed to be no dividing line - so should I reject what I'm learning in school? Some of it, sure. Should I even bother planning for college? The world's sure to end before then, right? Why should I bother thinking about my future at all then? I'll just go through today, and the next today, a whole series of them, until it's tomorrow and then my Lord will come.

I'm glad that religion is kept out of Mark Romanek's Never Let Me Go, at least explicitly, but after watching it my second time yesterday I found myself reminiscing upon the mindset religion once had me in. A lot of people seem to leave the film frustrated with Cathy and Tommy and Ruth and that they never fight back. That they don't try to run away. Run away where, I want to ask? Fight who? These are kids who had to learn how to order a coke when they were eighteen. This is a world where the Rapture is a real thing, and here it's called Completion, and it has a set date. It is Death sanctioned by the people - Miss Emily (Charlotte Rampling) points out to Tommy and Cathy that if you asked the world to go back to the Dark Days of dying and disease, they will simply say no - and these carers and donors are the sacrifice keeping that Darkness at bay for the rest of the world. 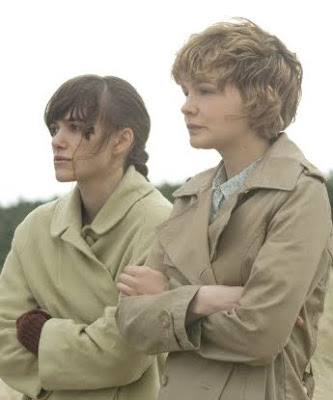 Romanek knows well enough not to shoot his characters in any banal Christ poses - a moment of grace as a character dies and the screen fades to a blinding white is immediately proven to be no heaven but rather just a cold and cloudy sky - but the point is there and the frustrations so many people feel watching these kids martyr themselves for a populace that won't even look them in the face, that finds them at best unsettling, seems to me purposeful. It is to question their blind devotion to their purpose. It is to see what could have been between Cathy and Tommy, to imagine his figure across that field turning from a speck into a full-size person, coming up to her, and a long life together that could have been, all of it wasted, for nothing, spent on someone else's petty jealousies and the outside world's unfair interference... that is this story's power. They will work to make us not notice what is right in front of us. They will tell us untrue stories of other places, other things, they will distract us. The handless starved ghosts outside the gates of Hailsham haunt Cathy and Tommy and Ruth all their lives, and before they even realize it what mattered most is gone, replaced by a cold and cloudy sky and detritus flapping in the wind. Who could make up such terrible things?

And then wham, credits. The brevity with which Romanek's film plays out is especially haunting. Each scene feels truncated somehow, as if the camera blinks before staring for too long. Mulligan and Garfield and Knightley all seem so young. The latter two so spindly and weak, while Mulligan wears the age in her eyes... her huge wet sad eyes. The down-turned mouth. While the early scenes with children forming their triangle of passive-aggressive emotional dependency serve an important function, it's when the battered shells of these young bodies start lurching around the hospital hallways and cold concrete streets that Never Let Me Go grabs ahold with an eerie unsettling power. They are too young. They are too naive. Andrew Garfield is still jumping in mud puddles and waving his arms around like a child as he gallops across the beach. What we ask of other people is too much. What we want from them, the way we can cannibalize someone else to keep ourselves standing. 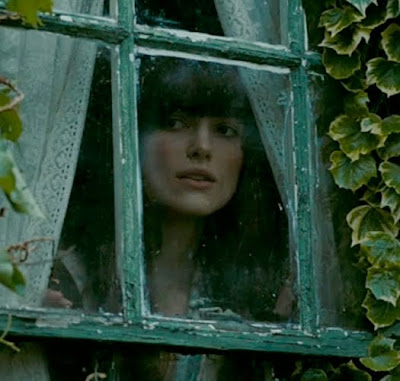 Ruth couldn't be the one to end up alone so she found a way inside and she gobbled up all the air in the room, spinning her head back and forth between the two she knew should be together. Knightley's like a cat, climbing up on top of Mulligan and Garfield as they sleep and sucking out their air. She never lets them alone, always in the room, watching. Knightley does beautiful work with her tall sharp frame - nothing about Ruth ever seems huggable. Her smiles seem panicked as if she's afraid you won't notice them fast enough. When her donations start and she starts to fall apart the facades do too - her shoulder droops, her eyes go dark, she can scarcely pull back her lips to smile at all. Ruth frailty was always hidden under a pile of affectations, and as the reality of her situation becomes too much to bear, Knightley's body starts to give out and reveal the true shape of Ruth. Twisted with guilt but still terrified to be alone, and knowing that redeeming the former will condemn her to the latter. For once they are ready to complete they usually do, the saying goes. 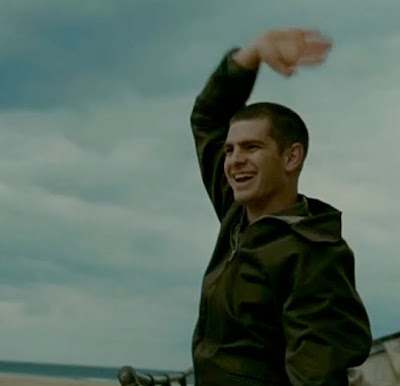 Andrew Garfield finds the exact right notes of hopeful naivete to play Tommy - he's not a complicated boy, even with all his emotional confusion; he just wants to believe what people tell him. He seems to have accepted their fate easier than the others without even realizing what he was giving up - it's not until he's briefly given a taste of what could have been with Cathy, only to have it torn away almost immediately, that the weight of their place in this world come down upon him. When Tommy and Cathy finally crawl into bed with each other, beyond all the tender romanticized trappings of the moment, the music and soft lighting, what makes the moment sting is the way Garfield weakly wipes at his face, reddish and his nose wet, like a little boy with a fever. We've seen him making love enthusiastically with Ruth twice before and the contrast, the ... well, the impotence of the moment is simply put devastating. 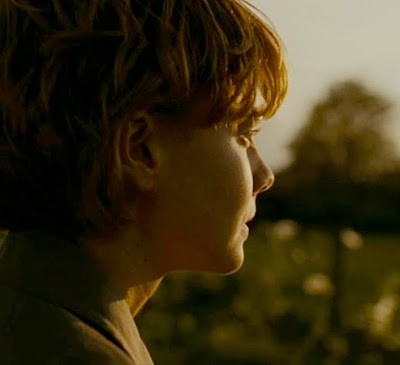 And then there are those devastating sad eyes of Carey Mulligan, up front and yet somehow always watching everything from behind. Why knock her closing monologue when we're crying too hard to hear it the first time? (And Romanek doesn't even have the good sense to cut to black - he forces us to wipe our snotty faces off in the bright light cast off a hazy summer green. The nerve.) Far from it, I don't find Cathy's need to finally verbalize her understanding of their place in that world at that moment anything but allowing the character her own moment of grace, writ for our ears. It's not a film that's spent any time hammering much of anything, much less its themes, home with a lot of force - it steeps us in this haunted world with great delicacy, great beauty, and lets the harsh corners seep in slow - and yet still a period seems the way to end it all the same. They died for this moment of grace, after all. It only seems right to allow them to have that at least. Even if its only a story they tell themselves. Hailsham was full of stories. Most of them didn't turn out to be true either.
.
Who? Jason Adams When? 12:52 PM

Bravo, JA -- a terrific post although I skipped over a few passages until I see the film. Isn't it ironic that because we educate and enlighten ourselves (and refuse to remain sheep), we're the ones headed to hell! That's the notion that Bunuel captured so well in The exterminating Angel. Anyway, thanks for your words...

Beautifully, beautifully said. The movie does expect a lot out of the viewer but it gets under your skin and captures the essence of the book perfectly. And the performances are wonderful. And though we weren't at the right showing, we did see Ms. Mulligan get out of her car, three feet from us, and head into the Sunshine to introduce the film. Girl's got some great boots..

So, so glad you got this all out -- it gave me a second chance to sink into the ideas and the feelings and the characters. You get it exactly right about why this isn't a movie about them fighting back. Fight back against what, indeed.