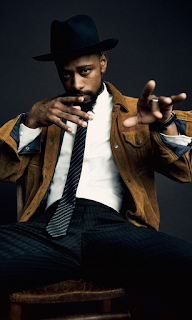 --- Into the Spider's Web - Fede Alvarez is gathering up a pretty hot cast for his reboot of the Lisbeth Salander franchise - Clarie Foy is taking over for Rooney Mara and we already oogled Daniel Craig's replacement the Swedish sex-ball that is Sverrir Gudnason; more recently added are Sylvia Hoeks, who was the only thing I liked in the new Blade Runner movie, and now here comes the super Lakeith Stanfield, who'll play a NSA computer expert dude who's chasing down our leading punk lassie. See a bunch of pictures of Lakeith right here, if you like.

--- A Haunting in Brooklynn - We told you with some enthusiasm last month about the forthcoming film The Turning, a new version of Henry James' classic ghost tale The Turning of the Screw that will star spectacular Mackenzie Davis in the role of the nanny and Stranger Things' Finn Wolfhard as one of her charges. Well here's some wonderful new news - Brooklynn Prince, the little girl who gave it her all + then some in The Florida Project (my review here), has signed on to play the other kid trusted to Mackenzie's care.

--- The Joy You've Felt - I've kind of had to give up on keeping y'all up with Call Me By Your Name links because I am but one man, and while I read it all, I cannot keep track of it all. And it's not like I don't do enough rambling of my damn own anyway. But if you missed Interview Magazine's chat with Papa Love himself Michael Stuhlbarg about the crafting of his already classic scene in the movie, you shouldn't. Read it over here. Oh Papa.

--- Say It With Streep - Oh this is a thrill - a new series has premiered this week at The Film Experience where John Guerin and Matthew Eng will be chatting about the world's most beloved actressing icon, Miss Meryl Streep - they'll be going through each and every one of her films, a week at a time. This week they tackled her first movie Julia, which threw her opposite no less than screen icons Jane Fonda and Vanessa Redgrave. I have never seen Julia, have you? Anyway I'm looking forward to the 90s Comedy portion of this series, myself.

--- Fix Your Heart or Die - One of the aspects of David Lynch's storytelling that is continually overshadowed and under-valued is his kindness, and so it was a lovely thing to read this long-form ode to the astonishing empathy of Twin Peaks and by extension pretty much all of his work. (thanks Mac) Particularly important I think is how it slaps us a little silly for continually attempting to divorce The Elephant Man and The Straight Story from lynch's oeuvre since they don't cleanly fit the narrative of what we think of when we think of Lynchian. In related news I watch the recent doc on Lynch over the weekend and don't miss it! And then you might as well re-watch all 18 hours of the new Twin Peaks again because there is literally nothing better to do. Literally.

--- Strangers Things - I'm kind of disappointed that the sequel to 2008's terrific The Strangers didn't end up happening with the original team - former director Bryan Bertino has a credit on the script, but otherwise it's all new faces both behind and in front of the screen. It doesn't help that the sequel's actors Christina Hendricks and Martin Henderson, both of whom I like perfectly fine mind you, feel like lower-wattage replacements for Liv Tyler and Scott Speedman. If it hadn't taken an entire decade to get made I'd say it feels like a cash in, but since it did take an entire decade I don't know how to feel. I guess we'll see in march when it's out - for now, the trailer!
.

I saw Julia the day after it opened at a Cinema in downtown Minneapolis. It is a beautiful movie, but you may want to do some research on Lillian Hellman first. Taken from her memoir, Pentemento, it tells the story of Hellman's relationship with her beloved friend, Julia, who was politically motivated and convinced the Jewish Hellman to carry out a dangerous (for her) activity in Nazi Germany. It's an absolutely beautiful film, which also features Hal Holbrook as Alan Campbell, Rosemary Murphy as Dorothy Parker and Jason Robards, who gives a superb performance as Dashell Hammett. Streep is barely in it. However, do see this lovely piece of storytelling on film.

The first "Strangers" was taut and compelling and shocking. This really does look like a by-the-numbers sequel, which ups everything but the suspence. More likely a bored rainy Saturday night movie than a theater experience.