The Time For Name Calling Is Finally Here 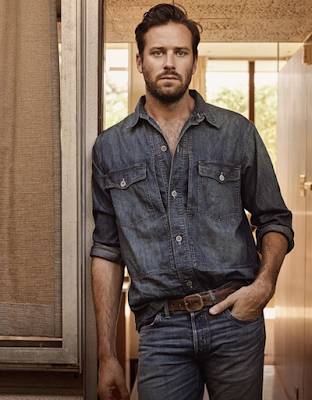 Because it's just about holiday time - today's only a half day here at MNPP and then I'm off until Monday - this will (probably, let's hedge our bets, I am a crazy person) be our last Call Me By Your Name post before the movie comes out in New York and Los Angeles on Friday. It's really here, y'all!
.

Occasionally I just have to remind myself and also YOU PEOPLE - especially now with CMBYN blowing up the way it has - that I was here WAY WAY WAY WAY before all of you, so YOU ARE WELCOME https://t.co/SDSXN3xiDT pic.twitter.com/czWKCe8QI7
— Jason Adams (@JAMNPP) November 22, 2017

.
If you're not in either of those cities you can see the roll-out plan right here. Anyway... where to begin? There's so much! First things first go back and read my initial reaction to the film at NYFF right here. And my next-day thoughts, slightly more coherent, are right here, more specific to the movie itself than my feelings. And here are a bunch of pictures I took of the cast and crew at NYFF.

But from there let's start with last night. Last night I saw CMBYN director Luca Guadagnino and CMBYN author Andre Aciman speak together at the New York Public Library. 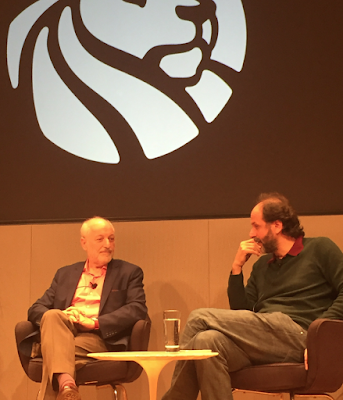 There's also a video on my Instagram of Luca talking about a scene I've mentioned here several times - the unbroken long take in town square - watch that here. But the NYPL streamed and recorded the whole conversation, you can watch it from start to finish here if you so desire. (I was afraid my big head might show up in the live-feed - I was sitting in the second row - so I'm glad to see it didn't.)

Anyway it was a good talk! I'd heard a lot of the stories before since I've been voracious, reading everything about the book and the movie for a good eighteen months now, but there were a few new nuggets. We learned that Luca got a specific reaction shot out of Armie (the one he makes during "The Morning After" for those of you who've seen the film) by showing him on set a YouTube clip of Debra Winger in Bertolucci's The Sheltering Sky. And there's a delightfully tense moment during the Q&A when a woman asking a question from the audience asks why Luca would cast someone who looks like Armie Hammer as a Jew. (In case you're not aware, Armie Hammer is himself Jewish.) 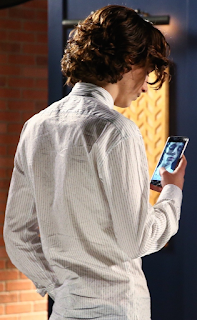 From there I have a bunch of links to share....

For a lovely comparison between James Ivory's two gay masterpieces, Maurice and CMBYN, click right here. It's fascinating to think about what changed and what stayed the same in Ivory's perspective on gay love stories over thirty years of time.

That picture way up top of Armie is from this new chat with him at Vanity Fair that's worth a quick skim. I like what he said about how people recognize him.

If I start linking to reviews of the movie I will be here all day - CMBYN has inspired so much tremendous writing over the past couple of months it's been a gift even beyond just the movie itself. But I really adored Alissa Wilkinson's review at Vox; choice bit:

"Ancient sculptures of figures who, as Elio’s father puts it, “dare you desire them” recur throughout the movie, strengthening the allusion to the ancients. And it mixes the pagan with the idea of a Garden of Eden — when Elio and Oliver spend their first night together, it’s certainly explicit at first, but then the camera pans out the window to rest on a tree. And a piece of juicy, luscious fruit shows up in a key, unforgettable scene that weaves together the natures of desire and guilt.
But unlike the story of the Garden of Eden, there’s nothing like sin in Call Me by Your Name’s vocabulary — or at least, nothing puritanical. (One assumes, watching the film, that a puritanical thought has never entered Guadagnino’s head.) This isn’t a film about wrongdoing and punishment; it is about love, loss, and piercing joy in the context of a gay romance." 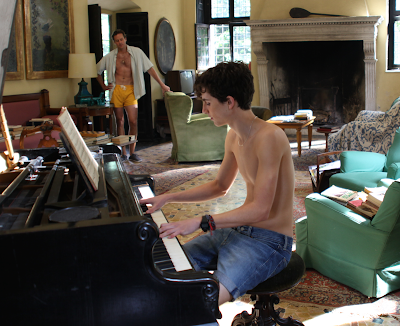 And you should read Matt Jacob's piece at HuffPo too...

"The characters in “Call Me by Your Name,” “Moonlight” and “Carol” can’t appear outside their crush’s window, like Shakespeare’s Romeo or like John Cusack in “Say Anything.” They won’t crash a wedding to prove their devotion, à la Dustin Hoffman in “The Graduate.” Nor will there be impassioned speeches about true love, as in “Notting Hill” or “Casablanca” or “When Harry Met Sally” or “Pride and Prejudice.” No corny cue cards, no “you complete me.” Those gestures are too overt, too public.
Instead, devotion crescendoes in tiny increments. A performatively defensive Elio tells his parents it’s impolite that Oliver’s preferred adieu is an offhand “later!” At a nightclub, his eyes stay glued on Oliver dancing with a woman. He scribbles notes that say things like “can’t stand the silence.” He pops up from a lake wearing Oliver’s Star of David around his neck. On average, these signifiers would be grander in a tale of heterosexual love, where best friends can agonize over will-they, won’t-they predicaments, and sages can help to galvanize a budding pursuit.
Because the wait was tortuous, there are few swoons as powerful as that of Elio and Oliver’s first kiss, planted after Elio decides he can’t settle for underhanded flirtations any longer. And there’s no finale like the finale of “Carol,” in which Carol smiles softly as Therese glides toward her, confirming that, yes, they’ll give the relationship a shot after all, despite so many cultural roadblocks. Borrowing the subtle language of queer yearning, these personifications of self-acceptance spark some of the most moving moments in modern cinema."

I really could go on and on... as you all well know by now. I mean how can I not quote Glen Weldon's review at NPR...

"Onscreen, the two men passionately kiss, and we wait — for the screamed epithet to pierce the night, or for the police lights to flare to life, or, most likely, for the flurry of punches to come sailing out of the darkness.
We watch, and we wait. And we wait.
Nothing happens. Well, that's not true — a lot happens, but not the thing we expect: Astonishingly enough, they just ... go on kissing, unabashed, un-bashed. Straight audiences will mark this quietly miraculous difference too, of course — but will they feel its simple power with the startling intensity queers do? Will it seem to them, as it does to us, a kind of gift, unlooked-for (yet always looked-for), freely and fulsomely offered?" 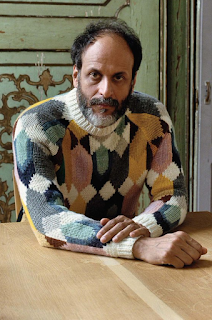 And oh what about this interview with the cast and crew of the movie at Rolling Stone? I very much agree with what Luca had to say when asked about not hiring gay actors for the roles...

""I am a gay man," he states flatly. "I'm attracted to men; I've always been. I live my life with a companion that is a man. I have admiration for the expression of a lot of LGBTQ artists today ... but I struggle with the concept of defining a person by his or her sexual identity. It makes me so uncomfortable. I just don't get it, and I don't believe that the fight for civil rights – which is so crucially important – goes hand-in-hand with indictment of someone by his or her identity."

Continuing this thought, he adds, "I do not cast my actors by their sexual identity. I cast them because I desire them. And I desire them because I can feel they mutually desire me. I think that this is a very queer emotion, and I think it's much more queer than casting a renowned gay man to play a gay character. I think it's parochial and borderline conservative to think like that.""


Like I said I agree with him, but I also think I agree with him in the context of him specifically being the filmmaker - I don't know that I would agree if this was a Ron Howard Movie, ya know? Hell just go watch Armie Hammer and Leo ignite absolutely nothing in J Edgar through the eyes of Clint Eastwood and you'll know what I mean.

But anyway you get the point. Call Me By Your Name, beyond being a cinematic bounty, has blessed nearly every writer that I've seen come upon it. Do yourself a favor after you've seen the film and go around and read everything everybody's said, because it's like the openness and aching beauty of this movie just spilled right off the screen and into all of our hearts and fingertips. As Awards Season plows on with its gruesome business tactics and compartmentalization of Art just enjoy, for a minute, this small sun-dappled thing that has impressed and moved so many. Love this love this love.

NOOOOWHYYY. I was all set to see it on Friday but it's not out for another MONTH!?

The part about this movie blessing writers is so dead on.Every review that I have read is poetic, luscious, makes my head swoon & makes me want to cry at the same time.The genuine emotion of your review shook me to me core.I am not queer,so I know I can't possibly understand the struggle. But living in a conservative country,I can't really talk about it with anyone or like share fb posts or something.So I always wonder I am miserable because I have to hide a movie that I like,so what
misery a person goes through when one has to hide oneself? In reviews like yours,your soul is bared in celebration of this movie & love & that always brings a smile.Thank you 😍

I'm so lucky to have seen this movie twice in one week, and attend a Hollywood Q&A with Luca, Armie, Timmy and Michael. I'm so glad I no longer live in Michigan because it won't open there until January.