Good Morning, Call Me By Your Name! 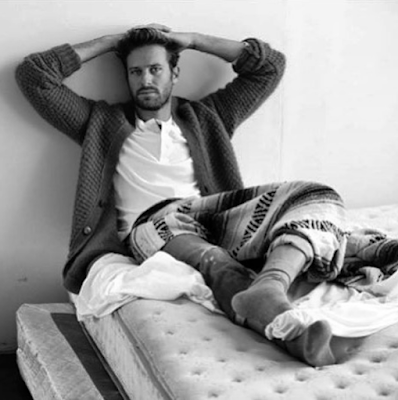 I was sitting down to watch Call Me By Your Name 24 hours ago, and I haven't stopped thinking about the film since - the emotional reaction to the film that poured out of me yesterday afternoon has been well-received by y'all and I appreciate all the kind words with regards to it. But I have more to say!

The psychological wallop that the film hit me with hasn't entirely worn off but it has enough that I want to actually talk about, you know, the movie itself. So here are 5 scattered thoughts that I have been thinking about ever since yesterday. (Yes it's spoilery, but not if you've already read the book.) 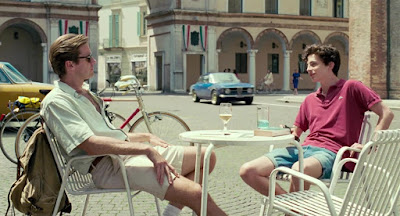 1. I don't remember if this is in the book or not (it seems like a thing that would be in the book) but the first time Oliver (Armie Hammer) and Elio (Timothee Chalamet) hang out just by themselves - when Elio takes Oliver into town on their bikes and they sit in the town square talking about what there is to do in town - Armie Hammer looks down mid-conversation and zips up his shorts. It's such a perfect character beat for Oliver - was he too careless while getting dressed, or was he drawing attention to his crotch on purpose? It could be both.

2. I know some of you want me to tell you what nudity the film contains (there are butts!) and I know going into this that I'm going to sound like a total cheese-ball saying it but it is about so much more than a check-list of body-parts - the film is sexy, incredibly profoundly sexy, because of the easy sense of spectacular and honest intimacy that it achieves. It is slow - one might even say languorous if one were aiming for a poster quote! - and takes its time (there's an entire sequence that is about the passing of the day that is exquisitely drawn out) getting close close closer to these characters, so by the point Elio is putting his foot on Oliver's foot or Oliver is giving Elio a massage and tucking his leg under his own you're about fit to burst.

3. Which brings me to The Peach Scene, which Luca & Timothee nail so hard and with such subtle eroticism I couldn't believe it - you just don't see people willing to put this sort of vulnerability on-screen very much anymore. Everybody wants to giggle about it, to make the American Pie reference, but the movie cuts through all that noise so simply and honestly. I suppose this is the place to add that Timothee Chalamet's performance is magnificent - more than I really even hoped was possible. I know it's early to say this sort of thing (24 hours in and all) but this is the sort of performance that stretches across a lifetime - this is "Hey look we have our own James Dean now" level good stuff here. 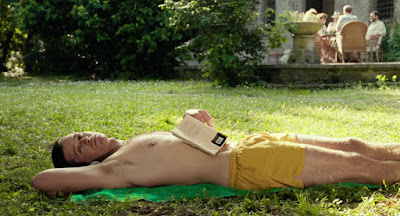 4. In conversation three times since watching the movie yesterday I have felt the need to qualify that praise with what keeps sounding like an after-thought but it isn't, I swear it isn't, that Armie Hammer too gives a fantastic performance in the movie. His role's just trickier - I didn't know how he and Luca would achieve what the book does, which is holding off on Oliver's desires until late late late in the game, but they manage it like gangbusters. It's only in the last act that Armie's boyish confidence and easy breezy demeanor reveals itself as a shield, and once that shield comes down, man did he break my heart. Once he's opened himself up to Elio he's given these wounded puppy close-ups that will just melt you.

5. The Sufjan music was almost too much for me to bear - it carried the movie from "movie" straight into my interior spaces. Sufjan's music, as you might know from my years and years of posting about my love for it, has already set up a big ol' house right inside my emotional spaces, and so Call Me By Your Name just walked up to the front door, knocked, and Sufjan let the movie in to call the place home for two and a half hours. I didn't stand a chance.

Okay that's all for this morning but who knows I might have more to say later - I might just post about Call Me By Your Name for the rest of my life now? The same thing happened when Brokeback Mountain came out - if you were around here in 2005 you know, you remember - but honestly CMBYN hits me even closer than Brokeback did; I maybe didn't grow up a rich kid in an Italian villa (I grew up about as far from that experience as one can) but I still see more of myself in Elio (or more aptly in Timothee Chalamet's performance of Elio) than I did in Jack Twist and Ennis Del Mar. Their love affair affected me deeply but they were never ME. Elio feels like ME in a way I have never been fortunate enough to see to on-screen before. And I'm deeply, passionately thankful for it. 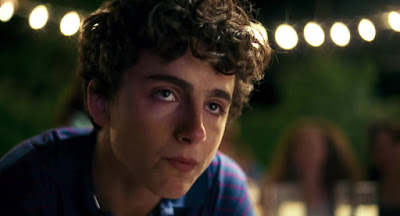 ETA Oh and I keep forgetting to add this: I took three videos from the NYFF press conference that followed the film yesterday afternoon where Guadagnino talked about all sorts of things, and if you'd like to watch them they're all right here, or you can go on and hit the jump for them...
.
.

This movie honestly stayed with me for weeks after I watched it.

Can I please just have this film fed into my bloodstream now? Please? When?!

The last time I looked forward to a movie this much was, strangely enough, "A Bigger Splash." Can't wait, and your posts regarding "Call Me By Your Name" have been beyond.

But can u please please elaborate if the camera lingers enough to appreciate Armie Hammer´s butt in the film? ;)

LOL sure! I like thinking about Armie's butt so sure! There are as far as I recall (and I have no reason to doubt my ability to recollect such a thing!) three shots of Armie's Beautiful Butt in the movie -- the first two are fairly quick (although I cannot wait to gif the first one because it is take-your-breath-away beautiful side-shot as he slips on swim trunks) while the third is longer but darker - it's the shot seen here in the trailer; it is sliiiiiightly lighter in the film than it looks there in the trailer but not enough. We'll see what happens once the blu-ray comes out and we can lighten the image :)

Anyway the camera lingers on their bodies in their little swim-trunks a whole lot so you get the feeling of skin and sweat just fine.

I appreciate your very elaborate answer, I am really looking forward to see the movie after what you describe.
Guess I´ve been a fan of Mr. Hammer for a while and now finally see him getting his due (acting speaking) just makes my day (plus been waiting for some nudity from him also LOL).
Thanx again for your answer, JA.