And I'll Call You By Mine

A couple months earlier there had been some fumbling with a stranger in his car. He'd picked me up walking home from school - he somehow knew my name. He was the cousin of one of my classmates, or so he said. He asked for my phone number and a few days later he picked me up. We drove out to a field. I thought I might be murdered, so I wrote a letter to my mother and hid it inside of my wallet, apologizing for being murdered.

I figured that was what I had. It was being murdered in a field, or it was AIDS. Hell-bound, ticket for one. The idea of a man holding me, telling me it was going to be okay - that was so far beyond what I imagined could be possible it was straight up science-fiction. It would never, not ever, be okay.

And then a few months later I met a man. He was seven years older than me. My best friend and I were at the mall and this guy worked there and he seemed impossibly chic. He had jet-black hair (I'd later find out it was dyed and his real hair looked very much like Armie Hammer's hair) and bright blue eyes and he smiled at me this great big smile. A smile that wasn't like other ordinary smiles. A conversation inside of a smile. He wanted to hang out. I felt electric. Everything about those days, looking back, it burns like looking at the sun. I can feel it on the back of my neck, the warmth of it, right now, here sitting at my desk.

The weekend after my 18th birthday he and I were standing in the kitchen of a friend of his in downtown Rochester; for some reason we were alone. He came up to me, all of a sudden, and he kissed me. I can feel his stubble on my chin. His hands holding my elbows, stiff as boards. The kitchen table against the back of my thighs. And I kissed back - erratically, violently, presumably awfully. A desperate thing gasping for air.

Time loses meaning at this point - it folds out and in, minutes become days become months. Some time later - later that day, or weeks later - he and I were watching a movie on the floor of the living-room of the enormous house where he rented a room. I had lied to my mother - this was right before I went to college - and told her I was going camping with "friends" for the weekend. (I still had that letter to her in my wallet just in case.) We were laying on the floor watching a movie and our legs were entangled and his shirt was open and he was touching me and I was touching him and we were breathing each other's breath...

His chest was hairy. I can picture the sunlight in his chest hair right now. My face burns with blood. I felt like I was on fire. I felt like my hands had become these enormous lumbering things and I was going to smother him, to stamp him into bits, to rip him open with want. I couldn't breathe. That night climbing into bed with him I shook violently, like I was having a seizure. My father has epilepsy so I know from seizures, and I thought, "This is it." 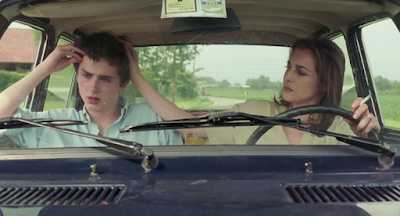 He could put his hand, his big strong hand, on my heart, and calm me - a calm that was more honest than all the terror and pain I had been convinced up until then would be my only lot in life.

Call Me By Your Name brought all of this flooding back over me this afternoon. On my way back to work after the screening I had to stop in the street, step off onto a little doorway, and I shook again. I shook with tears and with memories so strong they tore the breath out of me. A movie is made for everybody to enjoy and I sure hope you guys enjoy it, but this movie meant something more profound to me today than I'm going to be able to properly express right now.

It's all right there in the final shot, an astonishing close-up of Timothée Chalamet going back over everything with his eyes, trembling, this fresh love affair and all the possibility - the future and the past and the life neither he nor I knew was waiting right there, an echo across time and an ache that someone finally, after so many many years, felt along with us.
.

LUCA GUADAGNINO talking CALL ME BY YOUR NAME at @thenyff #nyff #callmebyyourname #lucaguadagnino
A post shared by Jason Adams (@jasonaadams) on Oct 3, 2017 at 9:29am PDT

That was very beautiful. Thank you for sharing that with so much honesty attached. Very authentic.

Thank you for sharing this. Very, very powerful.

Very beautifully put. I'll venture to guess that many of us had similar experiences. My first time, at least the first time that meant anything to me, was a friend of a friend, a few years older and a few years out of the closet before me. I remember the first kiss, the first embrace, the first everything!

This is so beautiful. Thanks for sharing.

A lovely memory piece. It's great that the movie unlocked such powerful memories for you. I've always wanted to see it but now that desire has greatly increased. Thanks for pulling us in to your experiences both with the movie and your youth.

I am feeling very sad and hopeless lately because of a love story gone wrong. And I couldn't cry nor laugh for weeks. But I just read your piece and cried uncontrollably on my couch. Thank you. Everything will be ok.

Also, please write a book and call it "Sorry for being murdered". If you won't, i will.

Do you still carry that letter in your wallet?

Thanks for all the kind words, everybody!

Anon 7:50 -- I do not! I thankfully got over that a few months into college. I am not 100% sure what happened to the letter either but my guess is it's in one of the many many boxes I have in storage at my mother's. I've often had this image of my mother stumbling upon it and being all WTF :)

So beautiful and touching.

Wow, sounds like it stirred a lot up. That's the power of showing all kinds of stories in the movies.

That is such a wonderful story. Because of your earlier writing about the movie, I went out and read the book. I can’t wait for the movie.

That was beautiful, the best review/experience I read so far.

Thank you for reminding me of the Electricity of that First Kiss. And thank you for sharing your story. Beautifully written.

That was beautiful. In reading your wonderfully written story, I was taken back to the first time I was held by a man, finally felt life and believed in tomorrow. Thank you Jason. And now, I must see this movie!

Your story brought wonderfully happy/sad tears to these eyes, and left me beyond eager to see this movie. Thank you.

Good stuff and all but tell it to Hammer and Chalomet who are blue-jean jacketing their performances to death in all the interviews they're showing now. As actors, of course, they felt nothing for each other. That was all Luca's (the director's) doing. They take no credit for it.

Yes, and god bless you for feeling something deep while you watched a movie on which you decided a year ago you would take your reputation.

Thanks for sharing; but next time don't.

very beautiful, and thanks for sharing!

Lovely. Thank you for sharing.

@NealB - what does "blue-jean jacketing" even mean?

Thank you for sharing this and for making me cry over my breakfast.

This is gorgeous. Made me remember the first time I ever touched another boy - at summer camp (of course) while everyone else was asleep and we stayed up having a conversation with each other through writing on a notepad so we wouldn't wake them. It was the first time I knew for certain everything about my sexuality. I still have that notepad in a box somewhere, and still think of that guy - wondering where he is now, what he's doing, who he's doing... I thought of him a LOT while reading Call Me By Your Name, so I can only imagine what seeing the film will be like.

That was absolutely beautiful, Jason. Thanks for sharing.

Such a beautiful powerful post. I can relate to the book too (thanks to you) and now I look forward to the movie with lots of Kleenexes (also thanks to you)! I was underage just like you too and scared just like you and totally reborn just like you. Thank you for bringing back some beautiful memories of my first time being in the arms and trust of a sensually experienced, older guy.

Oh, I just loved this. I can't wait for this movie.

On a blog of mostly objects, this moved the dial a bit towards human.

WOW. Thanks for this, Jason. xx

It has been 5 days now since I've seen the film and I am still having a hard time coming up with the right words to say about my reaction, but I think this as close as it will get. Thank you so much for sharing this. We all needed this film.

Wow...what a beautiful essay you've written, to which I am very much a late-comer having happened upon it in the midst of following various links about CMBYN. I read Aciman's book a month ago and saw the movie last week: I thought it was wonderful and heartbreaking with beautiful performances all around. It lingers in my mind. But so does your recounting of your own experiences around Elio's age. The vividness of your memory, the precision of detail, the warmth of your expression have hit me hard, and made me think of my own past. Thank you for lovely words. I'll definitely visit your blog more often!

The movie did not make me reflect on my own early sexual experiences, but I connected the longing and the fantasy of what was happening to my adolescent years. Longing after straights that would punch me rather than kiss me.