Give Me Your Clothes & I'll Give You Mine 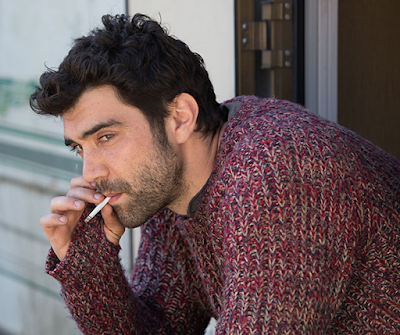 Once you see the gay romance God's Own Country - which is out this weekend in NYC & LA and which you should very much see; here's my review from earlier today - you'll look at that attractive red sweater that GOC star Alec Secareanu is seen wearing there as more than just a lovely piece of knitwear draped over a lovely piece of man. The movie imbues it with a talismanic power - it comes to symbolize the intimacy between the two men. (There's a scene where it's the only piece of clothing that can be seen on-screen even though both actors are there, if you catch my wink wink. You won't miss it, believe me.) 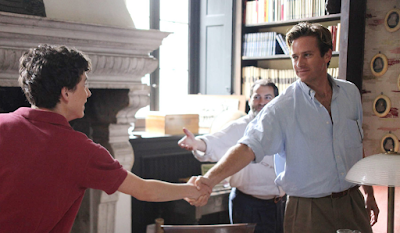 Anyway there's also a similar trick played with an item of clothing in Call Me By Your Name - there's a blue shirt that Armie Hammer's Oliver gifts to Timothee Chalamet's Elio that bridges the gap between the two men when they're separated, and which, on all four times that I have watched CMBYN, has immediately (and I think on purpose) given me flashbacks to the now iconic final scene of Brokeback Mountain, with the layered shirts of Ennis & Jack forever hung beside the closet. 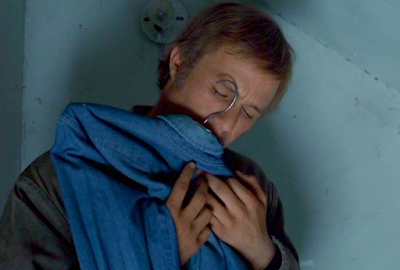 I suppose that there is something about this that is specific to queer relationships, this swapping of clothing - this slipping into your beloved's skin in this precise symbolic way - and I love the way these stories are echoing each other here. When I first reviewed CMBYN I told that story about the first guy I hooked up with and made mention of how he stole shirts from me, so clearly I relate.

Anyway it feels like we're developing our own cinematic language, one with its own history and weight, after not having had our stories told on-screen for so long. God's Own Country and Call Me By Your Name, while emotionally taxing at times, bear little of the imposed-from-the-outside tragedy that Brokeback did, but they both owe that film a cultural debt all the same. We can now get our love stories told our own ways, layered over one another like those shirts of Jack & Ennis. It just feels right somehow. It, dare I say, fits.
.
Who? Jason Adams When? 6:05 PM

OMG, that picture of Alec. I think I need to sneak away for some "alone time" now.

I've never watched the movie but in the novelisation of Making Love the doctor put on the hustler's jeans after their first night together. I always thought that were hot.

Yes! By the time the last act came along while watching 'God's Own Country' at the IFC, I found myself thinking how much I want THAT sweater.