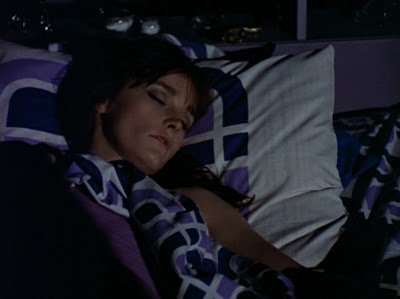 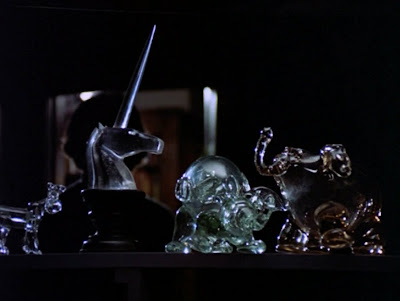 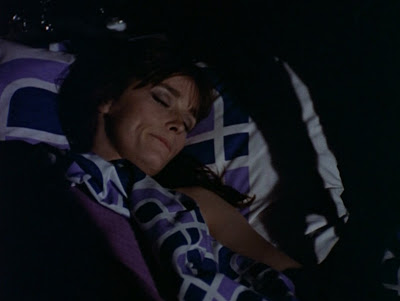 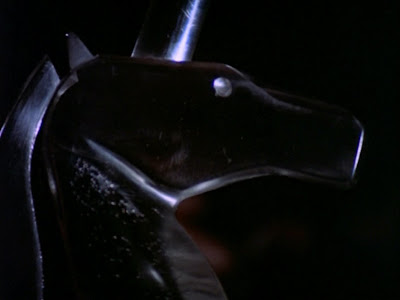 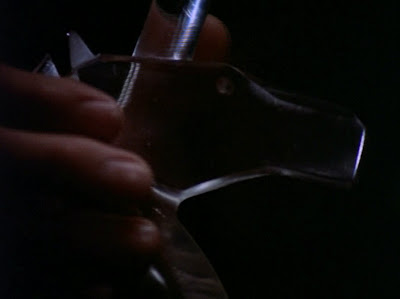 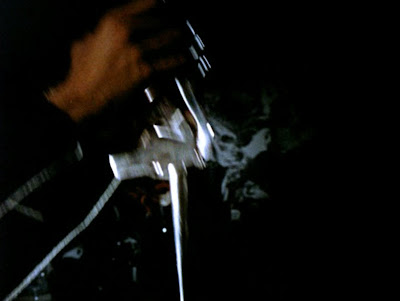 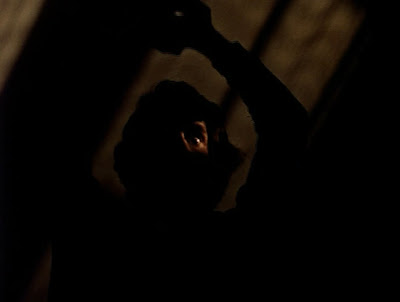 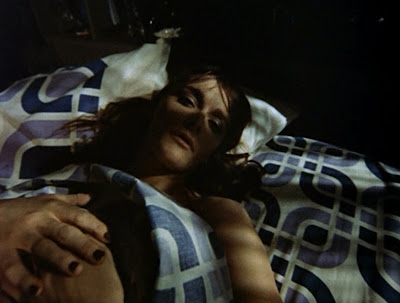 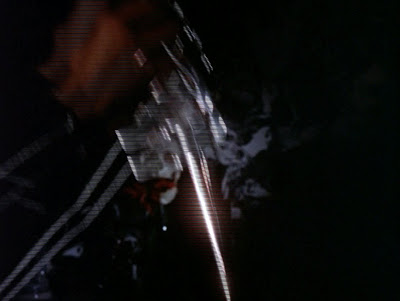 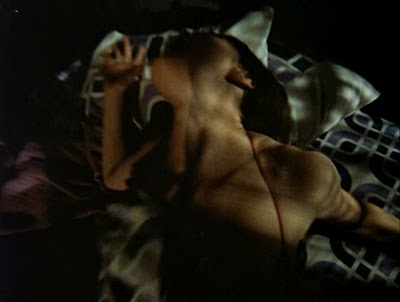 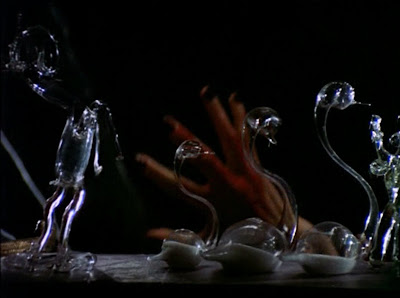 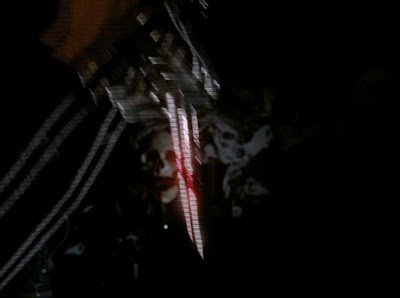 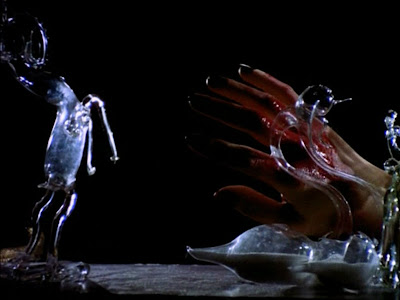 Black Christmas (1974)
RIP Barb Coard! You will always and forever be Margot Kidder's bright and shining (and drunk and belligerent) greatest achievement. Lois who? In her honor, here without interruption is a pearl of (sloshed) wisdom, a (wasted) life lesson if you will, from The Lady Coard herself: 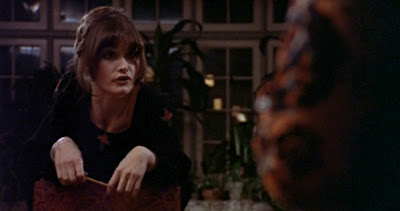 No, really! They just... three days, 24 hours a day, wha-voom! Wha-voom! Wha-voom! Can you believe that, three days? I'm lucky if I get three minutes! Do you know how I know this? Because I went down to the zoo and I watched them. It was very boring. Well actually, um, I, uh, didn't stay for the whole three days, I went over and I watched the zebras, because they only take thirty seconds! Premature ejaculation!"

Now that... that is character. That is what's missing from bullshit remakes without heart that get churned out today, like the Black Chrismas remake slash abortion. Bless you, Bob Clark.

Anyway, today's Way Not To Die was "inspired by" (that's the polite way to say "ripped off from") Final Girl Stacie Ponder's love-letter to the film that she posted on Tuesday. Stacie listed all the things she loves about original-flavor Black Christmas, which led to:

This really needs no explaining, but in case you don't get it: someone is killed WITH A CRYSTAL UNICORN."

Indeed! Fancy that. How could I resist after that? I could not. I am only human. Of flesh and bone. Am made. Also, I knew that I could have a blast making the title-card for this death, and I did. The Wrath of the Crystal Unicorn!!! Unicorns, rainbows, curly-q'd fonts with i-topping stars! Whee a blast. A blast was had. By all. I'll shit sparkle-dust for a week. 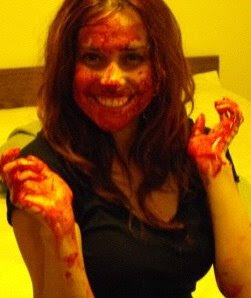 --------------------------------------
Previous Ways Not To Die: The Ultimate Extreme Make-Over -- Drown In A Sink Before The Opening Credits Even Roll -- The Dog Who Knew Too Much -- Don't Die Over Spilled Milk -- Inviting the Wrath of Aguirre -- An Inconceivable Outwitting -- The Five Point Palm Exploding Heart Technique -- Nipple Injected Blue Junk -- Your Pick Of The Deadly Six -- Thing Hungry -- Don't Fuck With The Serial Killer's Daughter -- DO Forget To Add The Fabric Softener -- Any Of The Ways Depicted In This Masterpiece Of Lost Cinema -- Rode Down In The Friscalating Dusklight -- Good Morning, Sunshine! -- Mornin' Cuppa Drano -- The Cylon-Engineered Apocalypse -- Tender-Eye-zed -- Martian Atmospheric Asphyxiation -- Maimed By A Mystical Person-Cat -- The Sheets Are Not To Be Trusted -- Handicapable Face-Hacked -- I Did It For You, Faramir -- Summertime In The Park... Of A Pedophile's Mind -- A Vengeful Elevator God: Part 3 -- Strung Up With Festive Holiday Bulbs By Santa Claus Himself -- A Vengeful Elevator God: Part 2 -- A Vengeful Elevator God: Part 1 -- Decapitated Plucked Broiled & Sliced -- Head On A Stick! -- A Trip To The Ol' Wood-Chipper -- Pointed By The T-1000 -- Sucking Face With Freddy Krueger -- A Pen-Full Of Home-Brewed Speed to The Eye -- Motivational Speech, Interrupted -- A Freak Ephemera Storm -- When Ya Gotta Go... Ya Gotta Go -- Hoisted By Your Own Hand Grenade -- Having The Years Suction-Cupped Away -- Criss-Cross -- Turned Into A Person-Cocoon By The Touch Of A Little Girl's Mirror Doppleganger -- Satisfying Society's "Pop Princess" Blood-Lust -- Done In By The Doggie Door -- Tuned Out -- Taking the 107th Step -- Rescuing Gretchen -- Incinerated By Lousy Dialogue -- Starred & Striped Forever -- Vivisection Via Vaginally-Minded Barbed-Wire -- Chompers (Down There) -- Run Down By M. Night Shyamalan -- Everything Up To And Including The Kitchen Toaster -- Sacrificed To Kali -- Via The Gargantuan Venom Of The Black Mamba Snake -- Turned Into An Evil Robot -- The Out-Of-Nowhere Careening Vehicle Splat -- "Oh My God... It's Dip!!!" -- Critter Balled -- Stuff'd -- A Hot-Air Balloon Ride... Straight To Hell!!! -- Puppy Betrayal -- High-Heeled By A Girlfriend Impersonator -- Flip-Top Beheaded -- Because I'm Too Goddamned Beautiful To Live -- By Choosing... Poorly... -- Fried Alive Due To Baby Ingenuity -- A Good Old-Fashioned Tentacle Smothering -- Eepa! Eepa! -- Gremlins Ate My Stairlift -- An Icicle Thru The Eye -- Face Carved Off By Ghost Doctor After Lesbian Tryst With Zombie Women -- Electrocuted By Fallen Power-Lines -- A Mouthful Of Flare -- Taken By The TV Lady -- Bitten By A Zombie -- Eaten By Your Mattress -- Stuffed To Splitting -- Face Stuck In Liquid Nitrogen -- Crushed By Crumbling Church Debris -- Bitten By The Jaws Of Life -- A Machete To The Crotch -- Showering With A Chain-Saw -- In A Room Filled With Razor Wire -- Pod People'd With Your Dog -- Force-Fed Art -- Skinned By A Witch -- Beaten With An Oar -- Curbed -- Cape Malfunction -- In The Corner -- Cooked In A Tanning Bed -- Diced -- Punched Through The Head -- Bugs Sucking On Your Head
.
Who? Jason Adams When? 9:47 AM
Labels: horror, Life Lessons, Margot Kidder, Thursday Kills

That title card is the best thing I've ever seen in my whole entire life!!

Thanks for the support, friendo. We need all the help we can get- you'd be surprised (or WOULD you?) how expensive a quality foot-long double dong can be. Still, my homage to Requiem for a Dream won't be complete without it.