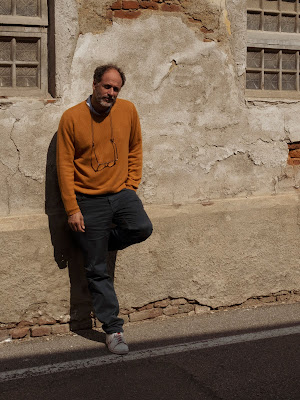 There is a terrific chat with director Luca Guadagnino up at i-D Magazine today that's mostly about his cannibal romance Bones and All (out in theaters on November 18th, here is my review!) but also some on his upcoming tennis movie Challengers with Josh O'Connor and Zendaya and Mike Faist, and also a little about fashion, and oh he also drops this bomb:

ID: Is the festival journey of Bones and All the main thing that’s consuming you right now?
Luca: Well, I’m preparing a new movie. I’m working on my design practice. I am trying to rest. I’m producing other movies.
ID: It’s never just one thing?
Luca: No.
ID: Do you like it that way?
Luca: I think I do, but I also think that maybe one day I’ll change that. To clear my mind.
ID: The new movie you’re working on, do people know anything about it?
Luca: No, no one does. It’s very secret.
ID: At what point do you want to reveal that?
Luca: When the movie is finally done.

Okay so... there's that. Luca's attached himself to so many projects over the past few years this could be anything, up to and including his Call Me By Your Name sequel... although Timmy's schedule is a little heavy for that, so let's not get ahead of ourselves on that front.

Although (cue me getting ahead of myself on that)  all they'd need is a few squirreled away weeks, lord knows. I will flash you back now to the very first post I did on CMBYN in May of 2016 when nobody knew anything about the movie -- it hadn't been announced, nor would anybody much have cared at the time if they had since Timmy wasn't a thing (I barely paid attention to him in that post) and Luca's films were strictly art-house. It was only a blip of a rumor as it shot, and only became a thing in the following months... and yes I like to think my relentless shrieking about it maybe had a little bit of an effect. It's one of my few indulgences, although me that. But hyping my ego aside all I'm really saying here is they managed to shoot the first film without anybody noticing -- it would be harder in 2023-23 but not entirely impossible if that was what they wanted to do.

My honest guess though is this is something smaller -- could be another fashion movie like his short film The Staggering Girl, or could even be another documentary like his Ferragamo doc that came out earlier this month. We will unfortunately just have to wait and see. Still... one does get tickled, thinking about them dropping news of a finished CMBYN sequel out of nowhere. And yes as Luca's said many times his idea for a "sequel" is very different from what we normally associate with the word -- I don't foresee it having much to do with Andre Aicman's book Find Me at all, for one. He just wants to make The Further Adventures of Elio, basically.

Do you think he would focus on Elio and totally forget about Oliver? I would love to see their story moving forward but Armie Hammer is not coming back for sure. Giving how the characters eventually ended up together in the sequel book, it seems weird to completely ignore the source material