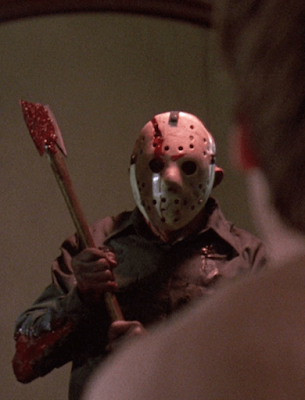 Since I've posted contrasting pieces of information over the past twenty-four hours about what Bryan Fuller's Friday the 13th prequel series will be and will have access to thanks to the rights issues surrounding the property, it seems only right to resituate all of that jabber with what we now know officially thanks to Fangoria speaking to Bryan himself and getting the scoop. The whole chat is worth a read if you're a Friday fan, but here's the gist on rights:

"Everything. We can use everything. We can go to Hell, we can go to space. That's not to say that we will do those things ... although if we do go 10 seasons, I will be lobbying hard to go to space... A24 and Marc Toberoff, who is Victor Miller's lawyer, have beautifully and excruciatingly assembled all of the Friday the 13th rights. As a streaming series, we have the rights to do everything underneath the Friday the 13th umbrella. The movie rights are a completely different thing. They are tied up at New Line and are super, super messy and probably won't be untangled anytime soon, but as far as us chickens in the television industry, uh, roost, we have access to anything and everything that Friday the 13th has done up until this point."

He goes on to call it the series a "pre-remake-uel" which, uhh, is a fascinating idea that he doesn't elaborate on in the slightest haha. I'm guessing that just means they plan on wandering through or repurposing everything that happened in the first eleven films, meaning everything up until Freddy vs Jason. Bryan's also very clear that we'll see plenty of Jason, this won't be a Pamela only story. Anyway like I said if you're at all curious go read the chat, it's only got me more excited. Also my boyfriend would definitely like me to mention the much-maligned television series from the 80s -- let's find a way to include that, Bryan! Accept that challenge, Mister Man!