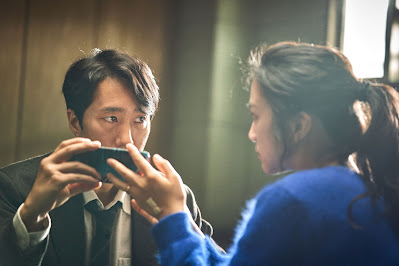 The first thing is a pop of orange. Detective Hae-jun (Park Hae-il) has come upon a crime scene, or what could otherwise maybe be an accident -- a man has fallen (or been pushed) off a steep mountain he'd been climbing, and his body lay shattered at the bottom. So in order to best preserve the evidence the detective slips on two traffic-cone orange plastic gloves to start a'pokin. And your eyeballs burst like bubbles just by looking at them -- the way they perfectly set off against the green-blues of the surroundings, the gray of the outfits. And you immediately say to yourself, "Oh right I am watching a Park Chan-wook movie." And you think how lucky, lucky, lucky we are for being in that fact.

This is how Decision to Leave, Master Park's first movie since he gave the world the stone-cold masterpiece The Handmaiden in 2016, kicks off -- a dead body, a pop of orange, and approximately one thousand question marks scratched down the wall of stone that the man's body tumbled along to its death. There are also mysterious scratches in the man himself, not to mention lingering close-ups of the hungry ants currently strutting their business across his unblinking eyeballs because, again -- it's a Park Chan-wook movie. But this murder mystery to-be is also a strange and wonderful romance, turns out, and those ants will come up in conversation a little bit later as a sort of romantic foreplay? Like I said: Park Chan-wook movie! 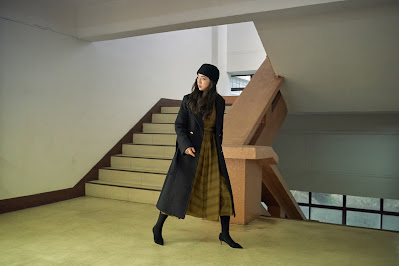 See, South Korea loves their detective stories, and Decision to Leave is definitely one of those -- a very good one, in fact. Perhaps one for the ages. But it's so particularly individually special, it's own singular thing, because it's from the man who gave us the extremely patient multi-act unraveling of story-threads in The Handmaiden. The same man who gave us the unexpected quirks of character colliding in service to sex sparks in I'm a Cyborg But That's OK. Which is to say that Decision to Leave takes its time and it goes about its own quirky little path and to be honest I wasn't sure if I was actually in love with it until its final act? How dare I doubt the man, admittedly. But it's been six years! And I'd forgotten how he spins his webs. So as he's ever wont to do Park's playing a long game, and it takes some time for its keen majesty to reveal itself, with all its peculiar particularities -- particular peculiarities? -- adding up to the sort of mountain you'll happily fall off of, time and again. Destroy me, Master Park. Destroy me over and over again!

To that mind there's a reason this movie is set in a seaside town shrouded in mist -- besides the fact that "seaside towns shrouded in mist" are one of the greatest of all the movie settings. It's because like those orange gloves and like those eyeball-ants Park's delicious stylistic flourishes, which seem to obscure intent to some critics -- he gets (wrongly) accused of the ol' style-over-substance so often -- become metaphorical markers through the mist along the way. Park, film to film, seems intent on creating a new language every single time, where the progression of colors indicate story-arcs as clearly as do sly longing glances between characters. The wallpaper is telling us a story, y'all! The story, even! Park is a filmmaker from the Hitchcock School where every dollop of production design and costuming is informing every beat, and you're wise to pay close attention -- I have no doubt this movie will unveil itself even further with multiple viewings, all its unexpected savory flavors rising to its fore. 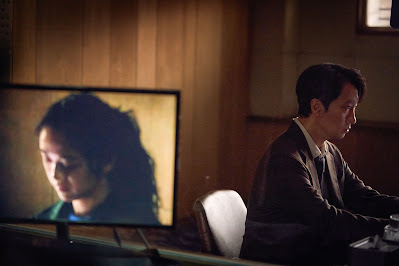 Especially in a story as seemingly front-obscured and loopy as this one, where character's true intentions plant themselves firmly in that self same fogginess, until its devastating final moments. See, that dead body found bashed up at the bottom of the mountainside in the film's opening was a man who had a wife. That wife's name is Seo-rae (Tang Wei), and she's a Chinese immigrant living in South Korea who spends her days taking care of elderly women. She seems kind straight-off, and she's very pretty of course. And so Detective Hae-jun in the way of all film noir detectives meeting their femme-fatales for the first time finds himself intrigued. Too intrigued for anybody's good doing. Especially when she doesn't react to her husband's death correctly... or in much of any way, really. And the first act speeds through this stuff we've seen so many times before with a shorthand we get well enough -- Hae-jun becomes obsessed watching Seo-rae's every move through his binoculars, through recording devices and interviews, all while his own wife at home goes ignored...

And that's all I really feel like saying about the plot. It's not about the plot, it's about how it's about it, if you catch my drift. And Park, novelistic and dense and stirringly achingly beautiful to behold, is firing on all his master filmmaker cylinders here. There are five second long shots of hands in handcuffs sitting centimeters apart that say more and stir more emotion than some filmmakers manage with entire movies. And effortless wit -- the man can frame a shot so it's immediately funny, without ever forcing it an iota. it just happens, and it's over, and you're reeling, catching up. Watching a movie like Decision to Leave is just like being fed, it's a feast of color and framing and character, of story so rich you smack your lips. Park Hae-il and Tang Wei are broken-heart and throbbing-soul and diabolical silliness -- this is another master love story from the master, bubbling with perversity and sweetness in perfect appointment. There just ain't nothing sweeter than soaking in the full Park Chan-wook experience, finest hair to smallest toe.