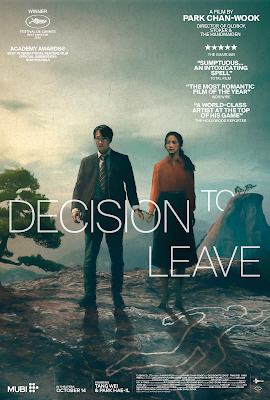 The final official poster and trailer for Park Chan-wook's new movie Decision to Leave have arrived today -- this film just played TIFF and I managed to review it for that, you can read my very positive thoughts right here. It's another marvel from the master! I know some people think it's too complicated for its own good and I was worried it was that for a bit myself but I thought he brought it all crashing in together beautifully in the final act. Anyway if you haven't been paying attention this movie tells the age-old Film Noir tale of a detective falling for the widow he's investigating but as with anything Park it's so much more. DTL is also playing NYFF here in NYC in a few weeks -- I will probably see it again then, on a big screen this time huzzah! -- but y'all don't have to wait too much longer after that as MUBI is releasing the movie on October 14th in theaters. Here's the trailer: