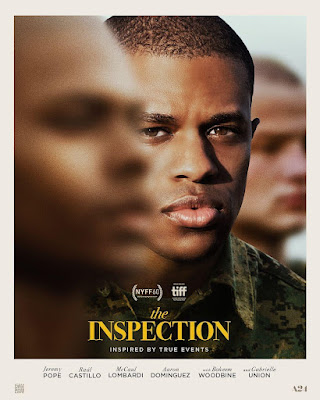 Giving off some major Moonlight meets An Officer and a Gentleman vibes the trailer for The Inspection is here this morning -- the Closing Night movie of this year's New York Film Festival, the drama from Pier Kids director Elegance Britton stars Hollywood actor (I will be happy when I no longer need to clarify that I mean the Ryan Murphy show in this context) Jeremy Pope as a street kid whose mother rejected him who decides to join the Marines, and it's based on Britton's own story. I have posted about this movie a couple of times previously, after I found out it co-stars American Honey actor (and big time MNPP crush) McCaul Lombardi -- he can be seen...

... in the trailer punching the main character in the shower, because of course I'm attracted to the homophobic bully type haha. What's new? (Lombardi himself seems anything but, for the record!) Anyway also seen getting some steamy action in the shower (and I too would include lots of shower scenes in my military movie), and this of a less violent sort at least, is Looking hunk Raúl Castillo...

... which seems all sorts of promising (even if Raúl seems like he might be ten years older than the rest of these actors -- am I nuts?) Anyway A24 has their hands on this movie so expect it to get some real push beyond the fests, and it's in theaters on November 18th -- here is the trailer:
Who? Jason Adams When? 10:50 AM
Labels: gratuitous, NYFF, Raúl Castillo, trailers

I guess I can get The Inspection from Netflix at some point. I really enjoyed Looking, I own the series on bluray

What's with all the towels? Since when do guys go around in towels like that?