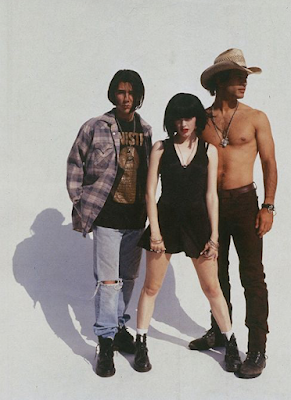 "When “Living End” came out, it was so polarizing in the gay community. People would tell me, “People are getting into fist fights in bars.” On the one hand it was such a punk rock movie and the attitude of it was so kind of “fuck everybody,” and at the same time it was hot guys making out. And what the movie had to say was so alienating to them that people would get so passionate about it. And Jim Stark, the producer, he’d say to me, “You make these gay movies that gay people hate. They’re too punk rock for gay people and they hate them.” So he’s like, “If you make a straight movie, I’ll produce it and get you real money for it.” And I said, “OK, sure,” because fuck it. Why not? So that’s why “Doom Generation” has a subtitle, “A Heterosexual Movie.” So I made this heterosexual movie, but in a very punk rock bratty way, made it so gay."

Today IndieWire (in the middle of a 90s Celebration Week) got Andrew Ahn, the immensely talented director of Fire Island and Spa Night and Driveways, to interview legendary queer punk director Gregg Araki! Read it all here! I love how much Araki there has been in the air this past week. I posted some photos last week and then just yesterday I retweeted out this interview with him at i-D magazine on the subject of the 30th anniversary of The Living End. (He also says in there that he is at work on a new thing.) All of that's a net positive, but that chat with Ahn really spilled this over into true bounty. Two great tastes, together at last! Now let's get his damn movies onto blu-ray.

Gonna add this photo of Gregg Araki and John Waters to my inspiration board pic.twitter.com/82CIXBYCBp

Saw Living End when I was a bit too young, but I loved it.