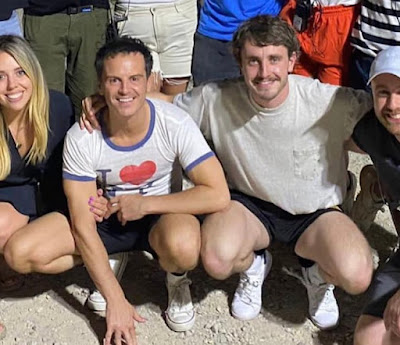 ... this photo of a generously short-shorted Andrew Scott and Paul Mescal commemorating the final day of shooting Andrew Haigh's film Strangers, which I first told you about only just in June -- my boys worked fast! Okay okay i'm not a total rube, I know how these things work and I'm sure all of this was in the works well before they properly announced the project to the trades. But still, if playing naive allows me to write the sentence "Andrew Scott and Paul Mescal really pounded that one out,' you're not gonna take that away from me right? This is based on the 2005 book by Taichi Yamada -- anybody read it? It also co-stars Jamie Bell and Claire Foy, who're playing Scott's parents in some sort of strange ghostly flashback sort of storyline that I don't really feel like diving into any deeper before seeing the film. All I need to know is there in that photo in how Andrew's elbow is resting on Paul's upper thigh --sold!

That Jeff Bridges header pics takes me back. He was absolutely stunning in Against All Odds.
Looking forward to Haigh's film. Did anyone other than me watch Scott in Pursuit of Love on Prime? I thoroughly enjoyed it, and the entire cast was fantastic.

the reason I check this site every day

Do we know if their characters hook up with each other?

I read "strangers" over the weekend. It's a lovely haunting quick read. The story is tight and very Japanese so it will be interesting to see how they translate the material for white idiots. I recommend reading it.