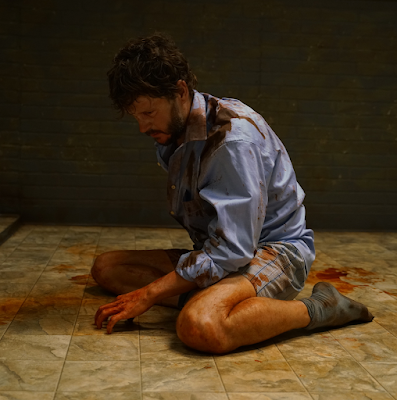 When last month I did my preview of movies I wanted to see at this year's Fantasia Film Festival one of the titles was the Lovecraftian horror flick Glorious, which stars True Blood's Ryan Kwanten as a dude who gets trapped in a road stop bathroom when some straight up Cthulhu tomfoolery (voiced by the Oscar winner J.K. Simmons no less) starts speaking to him via the glory hole from the next stall. And in said preview I made the mistake of saying I hadn't seen Kwanten in ages, somehow forgetting he'd only recently turned in a terrific performance on the horror series Them for Amazon. I won't make that mistake again here, but I will say that I'd like to see more of Ryan, and I don't just mean in the way that we got to see much of Ryan when he was on True Blood. (Although I did appreciate that way as well, obviously.) Anyway here, lo, our opportunity! Shudder is releasing Glorious for everybody, you and me and Bobby McGee, in just two short weeks! And today they've gifted us with the first trailer, watch:
Glorious drops on August 18th.
Don't miss it, it's glory-hole-licious!
Who? Jason Adams When? 4:08 PM