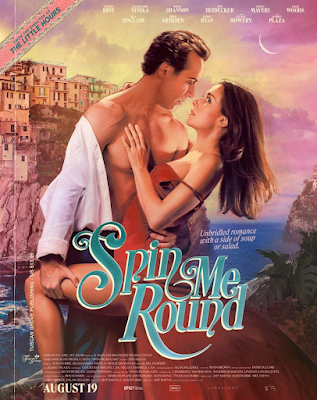 This romance-novel-inspired poster for the upcoming comedy Spin Me Round starring Alison Brie, Aubrey Plaza, and Alessandro Nivola just showed up on my social media feed (via) and like a baguette smacked upside my delicate face reminded me that I have not posted the trailer for this damned movie yet! For shame on me, and my apologies to the baguette. I did post about this movie when Nivola was first announced, as is my wont (and my want, when it's Alessandro we're talking) -- it's the new comedy from Jeff Baena aka the guy who made the delightful movie The Little Hours (that nun comedy that also starred Plaza) also aka Aubrey Plaza's cute furry husband. Weird that he keeps working with her, huh?

And also like The Little Hours this movie co-stars Molly Shannon and Fred Armisen and I assume some other people too, I have just now gotten lazy at looking up names. Most importantly though this one's got Alessandro! Looking full dreamboat. Plot is Brie plays an employee of an Italian-restaurant chain (think Olive Garden) who wins a trip to Italy, while Alessandro's the chain's owner. Shenanigans, some of the romantic sort, then likely ensue, and I am sure it will all be delightful. Here is the trailer:
Spin me Round comes out in theaters
and on demand on August 19th!
Who? Jason Adams When? 4:54 PM