Forgive me my goofball trespasses there at the start of this review, but Please Baby Please I feel will be the first in the forgiving line because this movie is defiantly, deliciously, not taking anything too serious. Starring the living-legend Riseborough and the spectacular-faced Harry Melling as a coupla soft squares lookin' for hard corners, this movie is like somebody spiked the punchbowl at the poodle-skirt soiree -- it's a beatnik blowout by way of licking psychotropic toad bottoms. It's a lot, buster, and I'm down like brown for the friction of this specific fiction. 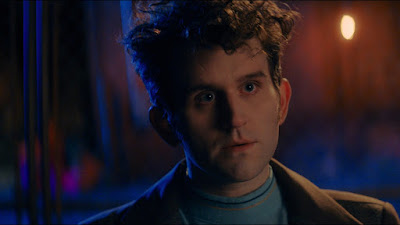 It is, that is to say, a movie that excites me. A movie I'm gonna watch a dozen times before my next two birthdays. Precisely one of those movies that I might have a hard time reining in my excessive writerly instincts with regards to, as I write about it -- if you've already checked out by now then okay, that's hip, you'd probably be too normie for this movie in the first place. But let me try to do the straight-laced and -faced review thing for a second, and set it all up straight for you, before going off in my dozen crooked directions again. See, Riseborough plays Suze and Melling plays Arthur and they are a quaint 1950s-ish downtown hipster couple who witness a most brutal murder on the street outside of their apartment.

This sexed up leather gang of finger-snapping thugs beamed straight from Kenneth Anger's horniest fever-dreams -- including all nine-feet-seven-inches of Karl Glusman, of the genus homoerotica personificata -- go at these strangers with pipes and hootin' hollers, and then they turn to see Suze and Arthur standing there, having very different reactions to the spectacle unfolding before them. Ways which they will each eventually spiral out in the service of. For her part Suze is struck dumb, scared too straight if you will, and she will come to spend the rest of the movie overcompensating for that shock -- trying to be the manly man she wishes she'd been in that moment.

Arthur, on the other hand, finds little animated hearts blinking in his eyeballs as he spies with his littles Glusman's Querelle-ian dreamboat, who's all tipped biker-caps and exposed Adonis belts and too too wet lips. As say we all -- Glusman is the dangerously sensitive, sensitively dangerous glam-boy of our dreams in this, whispery sex on two mile-long stick legs. And none of us, not a one or a whit, would stand a chance once he'd beamed his lasers back in our own direction. Arthur's quest as he accepts it is to get his hands on that mount of man, and ain't nothing coming in his way. 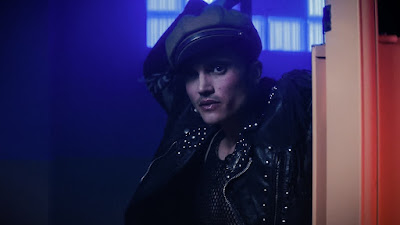 Least of all Suze, who's not too bothered by Arthur's newfound boy-love obsession -- she's got her own fish to fry, including a mobster-moll upstairs neighbor (Demi Moore, a coo in wig form) who's left her the keys to her sex-toy infested apartment. As much fun as everybody is having in the making of this movie nobody is having more or making more than Riseborough, a continually under-appreciated actress who lets loose in Please Baby Please with the force of megaton. Her waist cinched to one-inch-thickness and her skunk-matted hair teased to the outer-space-orbits she's channeling John Waters Heroine on speed, flicking her sharp angles like when that robot made out of dynamite in Looney Tunes cartoons starts sputtering smoke.

Aaahhhhhhhhhhhh she's electric! And she shoots this already wildly entertaining mid-century phantasmagoria into the stratosphere. That's not to undersell Melling, whose ironically straight man vibes get goofier as the movie struts along and he starts uncovering the femme underneath like a string of silken scarves he's tugging one by one by one out from his chest cavity. He and Riseborough and Glusman make for a stunning and special triangle of lust and violence -- a boot-scuffed love-story of tender hearts pricked by barbed wire and slicked back hair crying ten thousand tears. 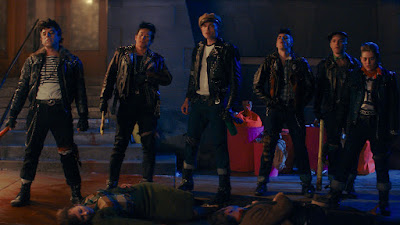