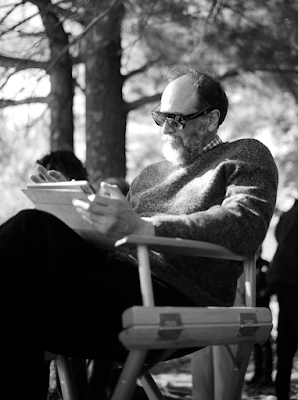 "I have an admiration for those who write about cinema, when they are good of course, and the way in which a reflection on a movie can in a way make a movie be a different movie... Before the digital revolution, movies were in the memory of the film critics, they couldn’t g back to watch them and review instantly, so it was morphing in the passage of knowledge from critic to critic to reader. To me, film criticism is an art and it’s so important. I love to read critics, and I also love when a critic is a bad critic on my work, if it’s intelligent.”

More quotes from the chat between Luca Guadagnino and John Waters at the Provincetown Film Festival this past weekend have appeared thanks to IndieWire -- I told you about this yesterday with a couple of photos from the event -- and Luca had the above to say about film criticism, of which he counts himself a fan. And I'm taking this as a personal compliment, even though I don't think I've ever said a mean word about his work in my life. Anyway another choice bit from the interview -- he gets asked if there will be any queerness in Challengers, his tennis movie starring Josh O'Connor and Mike Faist, to which he smiled and said, "It's me, so." That's why we love you, Luca!
Who? Jason Adams When? 11:19 AM