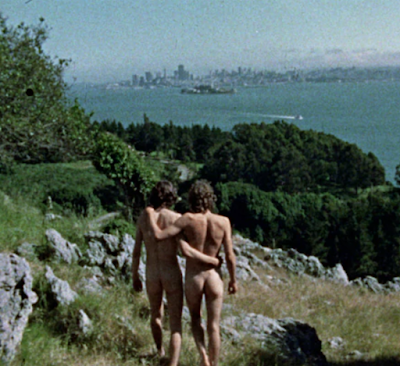 Hey gay people who collect physical media like me, here's a heads-up on a cool thing that got got announced by one of our favorite labels -- the fab folks at Altered Innocence (you should know their name if you don't -- follow them on Twitter here) are putting out a pair of lost queer should-be-considered-classics onto fancy blu-ray! You can read all about it and buy them here, but the basic gist is it's a double-feature of the erotic art films Passing Strangers (1974) and Forbidden Letters (1979) from Buddies director Arthur J. Bressan Jr., in a new 2K restoration. And loaded with extra special features, of course. If you've never seen Buddies by the way I recommend that one, it's terrific and it's been on blu-ray for awhile. I haven't seen these films but Buddies is enough to convince me I should. This stuff is our history, yo! Here's the (NSFW) trailer for the new set:
Who? Jason Adams When? 12:33 PM
Labels: gratuitous, trailers

I've seen the new restoration of 'Forbidden Letters' and confirm it is very good, so obviously I pre-ordered this already and can't wait to watch 'Passing Strangers'! I'd also recommend 'Buddies' to anyone who hasn't seen it yet!

Jason, my late partner really liked Buddies, more than I expected him too. Thank you for this info. I get a lot of ideas what to rent from you and MNPP