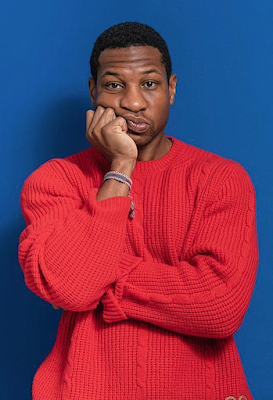 Leaving my desk a little early today for a couple of screenings -- I'm actually going to a theater to see the trailer (yes just the trailer) for the new Avatar movie. I liked the original Avatar a lot and am of the school that it's top-tier foolish to doubt James Cameron at this point, so I'm excited, naysayers be damned. And then I am seeing the new Doctor Strange film -- a little dispirited after Sam Raimi leveled our expectations last week when he said we should expect this to be less Sam Raimi and more typical MCU, but... it's okay. I liked the last Doctor Strange movie and I love Elizabeth Olsen as the Scarlet Witch (even if I hate that she only acts in MCU projects now -- let the woman do something else dammit!) so I think I'll probably like this well enough, fingers crossed. What I'm really hoping...

... is that Jonathan Majors makes a surprise appearance as his Loki character (or some iteration thereof) before his already-expected return in the next Ant-Man -- that's my one wish. We will see. But speaking of Majors, y'all remember those beefcake-tastic photos I shared from the set of the third Creed film several weeks back? I missed him briefly talking about the shoot to Variety, so here's what he said about that experience:

"He trained for at least a year to prepare. His hands have become so big he couldn’t even squeeze on a wristband for the Chanel pre-Oscars party. 'Over time, they just got bigger and bigger,' Majors says. Despite playing a boxer in the movie, which marks Jordan’s directorial debut, Majors insists he wasn’t left with any injuries: 'I got punched in the face about 100 times, but it’s all OK!'"