Do Dump Or Marry: The Top Gun Boys 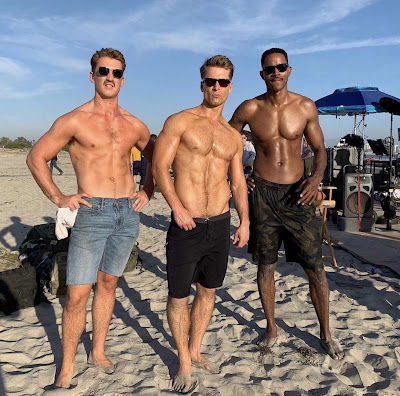 Popping in over the holiday weekend because this set photo from the Top Gun sequel demanded it -- that's Miles Teller, Glen Powell, and Jay Ellis posing their studly stuff from the immediately... well it might be early to say "iconic" so let's say revered, the immediately revered beach football scene. (Iconic.) I might have had a lot of mixed feelings on the movie (read them here) but this scene went into the "strictly positive" column, that's for certain. You can click that image and make it much bigger, but as you do that why not also hit up the comments below and give me a round of the ol' "Do Dump or Marry" for them three fellas? That's where you pick one fella to have one single solitary boink-fest with (Do), where you pick a different fella to pop out the airlock like poor ol' Goose (RIP Goose) had done to him back in the day (Dump), and one fella that you'd unite in holy forever matrimony with, at least until the Supreme Court outlaws gay marriage again (Marry). Have at it and happy Memorial Day, horndogs!
Who? Jason Adams When? 7:50 PM

Dump Miles Teller and flip a coin for the other two.

Dump Miles Teller. Do both Glen and Jay. Marry Manny Jacinto who was pretty much cut out of the movie entirely. Shame on them.

Glen Powell, Glen Powell, and Glen Powell. Do as long and as often as available. Dump for break-up sex and for getting it on while getting back together. And marry for the prospect of continuing to get it on.

Do Powell repeatedly and then marry him so we can do it forever. The other two can be ushers at the wedding.

Do Teller, since he apparently is not a fan.
Marry Powell, and don't let him use a razor for anything below the neck.

I don't know the other guy, but I'll do him too, just to be fair.

Mark said...
This comment has been removed by the author.
5:36 PM

The fact that they think long shorts are still acceptable is an automatic dump, where are the speedos, better yet a swim thong! If we had to endure scantily clad women in bikinis from the straight male gaze for a millennia it’s about time men show more skin! It’s a beach scene! But maybe mainstream American audiences can’t handle a man in a speedo.

American movies are the worst in terms of no-show for speedos. I'm so glad in Asia we men mostly wear speedos - straight or gay - on beaches, in swimming pools, etc. No such thing as long shorts. Pff!

Do, marry, and do again and again, and get done by Jay. Dump the other two bitches.

Do Ellis, Dump Teller, Marry Powell. Teller can play the drums while I do the other two.

Everyone else so far has said what I would do but as a sidenote, it's fascinating to me how this idea that Teller is a complete a-hole is pretty remarkable. Given the career he's had including some awards and recognition, and the fact that lately he's probably looking better than he ever has before it's astonishing how little appeal he continues to have. I confess I still think of him as a kind of brat but technically I haven't read anything positive or negative about him lately. What is it about him that seems to make him unappealing to us?

I'm obviously in the minority, but I would absolutely take Miles Teller over those other two - maybe not marry, but definitely DO, repeatedly.