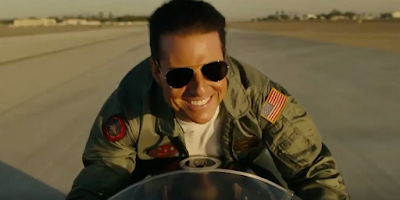 It's certainly better than the original film, which in Tony Scott's capably flashy fingers took all of the emptiest impulses of the 1980s and... well... it took them, anyway. It took them and it put them all on the movie screen -- as the poet once opined, it "put 'em on the glass." Tom Cruise as a gleaming toothpaste person in tight jeans, Kelly McGillis as a wide-shouldered haircare ad who melts like strawberry ice cream from Tom's little-boy touch -- and do note here that McGillis, who had the nerve to surrender to being a human being in the past thirty-six years, in nowhere seen by this still expertly surface-level sequel.

No such worries with Movie Star Tom Cruise, as there's not much room for profound humanity to be mined there -- his lip might tremble and his cheek-muscles might flex but not a hair will fall out of place, barely a line will crack that mask. Which is fine, it's fine, if you don't think about it. We need our movie stars, I miss having our movie stars, and Tom Cruise is trying to keep that cold flame alive while the next generation gets famous for posting their bowel movements on Instagram. And so Kelly McGillis is swapped out for the age-appropriate yet looks-ten-years-younger-than-she-is Jennifer Connolly, gleaming like the Penny her character is literally named after.

Who the hell is this Penny person? Does it actually matter? The script gloms a history onto her and Maverick that stretches to some vague way back but she is just "Supportive Lady," one with very expensive hair who nevertheless lets said hair down like "one of the boys" at the local bar she owns when that is asked of her. She drinks, she laughs, she looks you straight and decent in the eyes right before she goes stock-still like a NPC the second you turn your back on her. She's got a teenage daughter there to represent the possibility of Adult Things for Maverick -- ones he doesn't have to work at too hard of course, because that's the fantasy. That he can play around for thirty-six years and then be rewarded with someone in old age to take care of his messy diapers. The American Dream, baby! 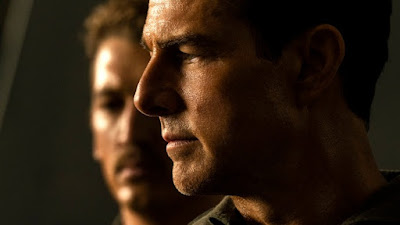 But if you don't think about the messy diapers, it's fine. It's fine! I mean you probably shouldn't think about the film's politics either while you're at it, which insist that technology intended to save human lives is actually awful, that Jon Hamm is actually awful, and that we should instead throw a bunch of young nameless people meat into the war grinder. For America, of course. Oh they have names, nicknames anyway, like Hangman and Ice Cream and Red-Shirt and Douchebag and The Girl One and Dolly The Cloned Sheep and Okay Maybe I Didn't Write Down All of Their Nicknames. Names just enough to fit on their helmets so we know which ones are exploding or which ones are not exploding.

Tom Cruise, who seventeen magazine profiles will remind you does all of his literally insane stunts, of course believes that it's important that we all throw ourselves into dangerous situations for top billing, and so that mindset naturally extends itself to international military warfare. Because why wouldn't it? Xenu didn't fly his spaceship into that volcano so you use your telephones on his movie sets, people.

The villains of Top Gun 2 are all black-masked baddies straight out of a G.I.Joe cartoon -- no country is ever named and no faces are ever glimpsed; hell I don't think we even see a skin-tone? And we never hear a language out of them either -- in the one interaction that demands communication between sides they both use hand signals. So clearly we should come to the conclusion that the villains of this movie are The Deaf. In the world of Top Gun Maverick all of the deaf people of the world have gone rogue, formed their own evil government, and begun hoarding uranium to kill the hearing with. CODA winning Best Picture was just the first step, and only Tom Cruise, with his large gleaming teeth through which he speaks so crisply and enthusiastically, can save us!

Okay clearly the villain of Top Gun Maverick isn't deaf people, but how am I not left to try to fill in some holes with a movie so resolute in having it every which way but human? Even Val Kilmer's brief scene return as Iceman, which by necessity heaves some real world levity into the film for the briefest of moments, is an odd spectacle of glammed-up suffering, all big scarves and silences, nearly impossible to get one's hands around. Top Gun Maverick, like its star, seem to truly believe in its bones that it's actually possible to be apolitical -- not at all a problematic stance in this year of our lord-almighty 2022 -- and that we as viewers can just cross our eyes a little bit and stare past Kelly McGillis to see the perfect Jennifer Connolly of our dreams who was actually there all along.

The sheer will with which the movie strives to be a nostalgia machine for a world that never was, for the coke-dream of the 1980s that the original coughed up, is so relentless that hey, as long as you don't think about it it's fine. The action is beautifully photographed and edited and scored, Lady Gaga screams over the credits, we see American Flags and glossy abdominal muscles and special effects maybe not in that order. You won't walk out of Top Gun Maverick a better smarter person by any definition of those words, but you will walk out! It probably won't actively kill you in your movie theater seat. And so it's fine. It's fine. 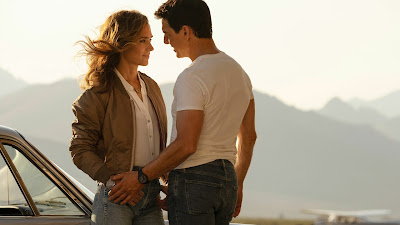 >>all of the deaf people of the world have gone rogue, formed their own evil government, and begun hoarding uranium to kill the hearing with.<<

I can't wait until this opens so I won't have to watch any more stupid trailers.

Tom Cruise literally makes my skin crawl! Will NOT spend my money on that piece of shit

No one mentions Manny Jacinto, was he edited out or just a glorified cameo?

You have to STRAIN your eyes to even spot Manny, Anonymous -- it's criminal. I assume if the film had been filmed several months later once everybody caught Manny-Fever his part would have been beefed up, but as is I don't think he even gets a line. He's one of the background fliers. I kept straining to see him in the shirtless team football scene and he is there, I glimpsed him for a definite moment, but that scene is all backlit sunset and it's often hard to tell who's who. Anyway it's a DAMN SHAME.

I'm going this weekend. I just rewatched the original, it was what I remembered it being-Kelly McGillis sure was gorgeous though.
I miss Tony Scott and his flashy, filmmaking ways.
Yeah, I'll being seeing this, probably tomorrow, actually. I don't expect much, so I won't be disappointed.

If you don't even know who Penny Benjamin is, your opinion of this movie is kind of irrelevant.

">>all of the deaf people of the world have gone rogue, formed their own evil government, and begun hoarding uranium to kill the hearing with.<<

Marlee Matlin would RULE in this movie.