By starting off this post with the above gif I'm admittedly ruining one of the funniest gags (heh) in the just-dropped trailer for Bros, the gay rom-com starring Billy Eichner and Luke Macfarlane, but I don't care. I gotta do my thing, and that shot from the trailer is decidedly "my thing."

Anyway I appreciate the fact that they are leading with the NSFW trailer full of sex and nudity and bad-words because I think that plus the whole "mainstream comedy" thing is what will set Bros apart from the rest -- gay movies are either ghetto-ized and get to be raunchy, or mainstream while neutered, but Bros is probably going to be the first one to be mainstream and raunchy all at once. This ain't ya memaw's Love Simon! (Oh please please please put that on the poster, studio.)

Yeah, I am totally just going to fill this post up with gifs of all of the shots of Luke Macfarlane in the trailer -- what of it? Billy would get it. He wrote the damn movie and made all of these scenes possible after all! Bros was directed by Nicholas Stoller, the man behind the last Muppets movie and the Neighbors films, so it might actually be funny -- this trailer has its fair share of laughs! It'd be great for this to be good, as staring at...

... Luke Macfarlane toweling off his bare torso will get us into the theater, but it won't sustain a full-length film. Well not one that's less than X-rated anyway. Other people glimpsed in the trailer -- Bowen Yang (who also co-stars in Fire Island, the year's other Big Gay Movie which I shared the trailer for recently) and Guillermo Diaz and Jim Rash and the always-funny Dot Marie-Jones.

Bros is out on September 30th!

ETA the film's poster, which I missed and I love: 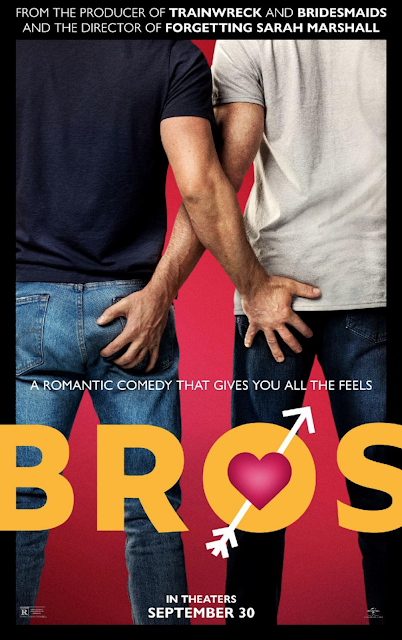 Who? Jason Adams When? 11:43 AM
Labels: Anatomy IN a Scene, gratuitous, trailers

I love Billy but he can be very insufferable at times �� I still think the movie will be great, but will probably relate more to Fire Island

Cute butt on Billy. If this is what we get in the trailer, we might see more in the film. 🤞