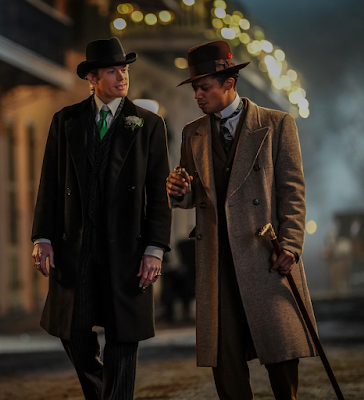 The first photos from AMC's upcoming Anne Rice's Interview With the Vampire series (and good for Anne -- RIP queen -- for getting that above-the-title treatment) have arrived, showcasing actors Sam Reid (mmmm we love him) as Lestat and Games of Thrones' Jacob Anderson as Louis, aka the Tom Cruise and Brad Pitt roles from Neil Jordan's 1994 film adaptation we all still remember well enough, I assume. There are a couple more photos at People, where these ones came from -- the series is out sometime this year. What do we think at first blush? 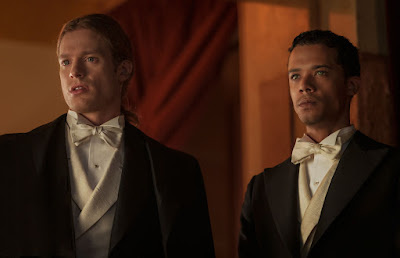 Oh good, I was worried I might be tempted to watch this. Actor choice is ridiculous. If they were going to try and make him a creole, they should have used a creole actor. The worst part, this looks like cracked or SNL parody of the Tom Cruise movie.

I liked the film quite a lot, but, just by looking at these pics...well... I'm tempted to pass, idk.

Can't judge from two pictures. I'm old enough to remember when the original movie was in production and Tom Cruise was announced as Lestat and everybody lost their shit, including Anne Rice herself. And then he was great and everybody STFU.