Heart Wants To Beat Like the Wings of Birds 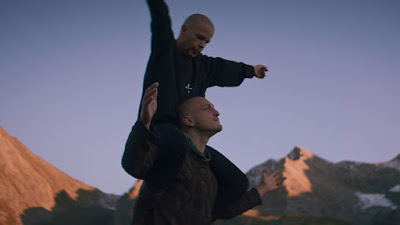 It is difficult for me to write a review of a movie starring Franz Rogowski and not turn said review into a thousand-word soliloquy to sing only the bottomless praises of said Rogowski. And even more I don't know that there's even a reason to not do that? He's always worthy, and he's worthy here again. But let's try. As a momentary thought experiment. Let's try to talk about the movie around Franz Rogowski today, because the movie -- Peter Brunner's Luzifer, which has just landed on Mubi; I shared the poster and the trailer at this link previously -- is itself a thorny, knotty, slippery and singular sensation. And Luzifer deserves its moment to shine, even aside from its leading man doing his as-ever spectacular business up front and all over the place.
Rogowski (and yes, after that introductory paragraph I did indeed go and start the next paragraph with the exact name I just said I was setting aside for a moment -- I'm incorrigible!) plays Johannes, a Nell-like simple-minded and semi-feral mountain man who lives in a rocky little pocket of the Austrian Alps with his mother Maria (Susanne Jensen, resembling nothing less than Linda Hunt play-acting as a bald-headed punk-rocker). And as far as we can make out he has lived there since birth. Maria (and no the Biblical-adjacent nature of these names was no mistake) is an extraordinarily emotionally-damaged woman who speaks often to her son of the abuse her own father and other men did to her just beyond the horizon-line, and she's raised her boy as a doting pet -- they bathe, sleep, do everything together, and the discomfort we're made to feel by their closeness is lovingly lingered upon by Brunner's camera, drawing us into their unnerving little nest whether we want to be there or not.

Of course there's no walling off the evil men do -- ain't no mountain been built high enough for that. And so cracks inevitably begin showing up in Johannes & Maria's already uneasy (at least to our foreign eyes) self-sustained paradise -- first from without and in turn, slowly, from within. The first sign that’s something up is when drones begin appearing in the skies over their home with alarming frequency, swarms of buzzing invaders with cold robot eyes, an obscene twist on Johannes' own pet eagle which he's trained to swoop up to the places where he can't reach. Turns out in the grand old tradition of 1980s movie villains there are some real nasty real estate developers eyeballing their plot of land, first offering a financial pittance (facelessly delivered by drone), at least compared to what this spot means for these two. But Capitalism, especially of the ski-chalet sort, knows of no ethics, and before you know it their property's being burned, their lives are being threatened, and all hell's busting up this pair's once quiet roost.
That's far from their only problem, though. Johannes' mangled misunderstanding of the world, shaped into an inconsistent religion by his mother, is too going off the rails with every passing day -- echoing the warped insular logic at the heart of Yorgos Lanthimos' Dogtooth actually, and similarly following in that film's footsteps toward increasingly inevitable violence. He’s obsessed with an unreachable cave situated in the side of a cliff-face, staring at it with shaman-like awe, the soundtrack humming a Peter-Weir-like dirge by way of drone-static – indeed it seems increasingly possible Johannes might evaporate into the stones like one of the picnicking school-girls at Hanging Rock, his atoms seemingly splitting through sheer will. An ecstatic vibration seems to have this space locked in its sights, something terrible trapped in its fissures and leaking up from within.
Brunner gives excellent sense of a spot gone wrong, that is to say – curdled from within and stepped outside of time, here comes Modernity’s pick-axe to chip chip chip off the razor-thin façade between old gods and the new, with one weak and confused soul unfortunately set right into the spot where everything might blow. Poor Johannes wasn’t built to maintain this kind of pressure, and before you can say “Dy-no-mite” in your saddest Jimmy J.J. Walker voice everything’s been blown to smithereens and back. But what a blow.
Luzifer is unforgettable and blessedly odd, with enough mood to blot out the stars and the atmosphere – its images hover and retract like we are ourselves haunting this place; like our very act of watching is setting the sky particles aflame. Rogowski and Jensen together create such a mysterious and bewitching spectacle of unknowable intimacy that looking itself becomes an act of violence, an intrusion – Luzifer’s film-stock seems to tremble with a terrible knowledge that Brunner keeps a fascinating whisper out of reach. This film’s a puzzle, a one-of-a-kind captivating mythic abstraction – like Johannes you’ll find yourself lost in steam and fog, swatting away awful thoughts, as the droning hum of the unstoppable grows up, out, to a screech and a shatter. 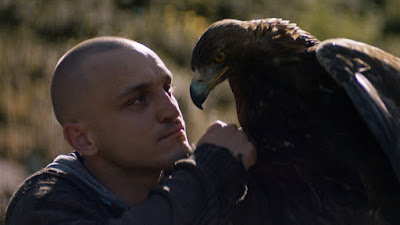