David: It's okay, I'm not offended. A lot of people think
we're crazy. But I doubt they're as happy as we are.

Happy birthday to director Karyn Kusama today! I hope she comes back and directs more episodes of Yellowjackets next season! She only did the pilot, but I'd love more of her golden touch in season two. (Whatever the case if Melanie Lynskey's there we'll be in good hands.) Stepping back to The Invitation (masterpiece!) which is to say more specifically Michiel Huisman news though, did y'all see this photo of Luke Evans teased us with on his Insta last week? 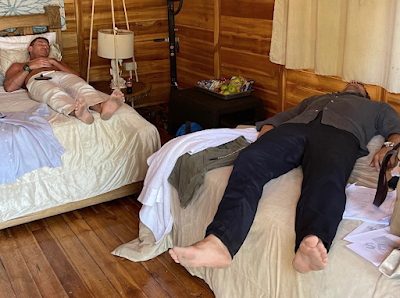 The two of them recently filmed Echo 3, an upcoming Apple+ series from Mark Boal, screenwriter of Triple Frontier and Zero Dark Thirty -- here's my post about that announcement. One assumes this photo was taken during the time of that shoot, or maybe they just couldn't get enough of each other's half-naked company. And if it's the latter we need to take to the streets to demand more proof.
Who? Jason Adams When? 2:16 PM
Labels: horror, Karyn Kusama, Life Lessons, Melanie Lynskey, Michiel Huisman

Dammit Jason, there you go again. I was just talking about The Invitation a few hours ago w/ a friend who hasn't seen it, b/c Tammy Blanchard is in Little Shop, and I'm seeing in in a few weeks. The Invitation is my go to recommendation b/c so many people have not seen it ( that and Kingdom, the Jonathan Tucker series on Peacock now, so very good).