From Here To Infinity 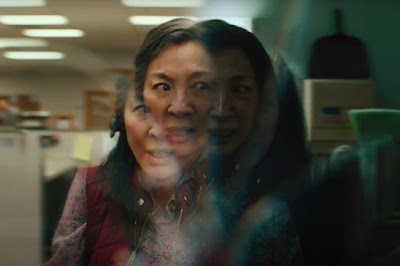 Everything Everywhere All At Once is a movie that picks you up by the lapels and swings you around the room, giddy with all the possibilities of cinema and total spasmodic psychosis. Its title ain't kidding. It's broken into three chapters -- Everything, Everywhere, and All at Once -- and it means that shit. One second exhilarating and the next twice so and the next a question mark and the next a silly symphony, this represents a big step upward for The Daniels (i.e. Dan Kwan and Daniel Scheinert) from their last movie, the already dizzying and amusingly strange Swiss Army Man, which once made us fall in love with Daniel Radcliffe's farting corpse.

There might not be any farting corpses here -- or at least I don't recall any; this movie's the sort of movie where you might actually miss a farting corpse on the first view through! -- but all that invention and experimentation is on full view, handing us what might just be an immediate singular classic in the mold of Eternal Sunshine of the Spotless Mind or Synecdoche New York, just having smashed those Charlie Kaufman molds to bits and splattered similar ideas of form and mania all over the dang place.

Like Spotless Mind this one's a lo-fi sci-fi dazzler about splintered personhood and the inability to articulate relationships before they've shuffled over into a brand new shape; the rule of the act of being studied changing the shape of the object being observed, and all. And like Synecdoche this one's obsessed with the big picture standing in for the small picture, not to mention vice versa -- a calamitous carnival ride of finding the Platonic Ideal by way of ye olde kitchen sink and its ever tag-along assorted stuffs. If you just keep stacking up the pancakes they'll eventually touch the sky!

Yes this is the sort of movie where I can pull out a nonsense pancakes metaphor from thin air -- if ever there was a movie that would look kindly upon me indulging my most flowery gibberish this one's the one. And to that tune here we are a full fourth paragraph in without me saying a single word what the hell this movie is -- that's probably not a record (I am sure I've written full reviews without barfing up the plot since it's my least favorite thing to do) but this movie in particular flaunts its indifference to straightforward anything, so why shouldn't I seize the opportunity, in the pinball-brained spirit of the thing? 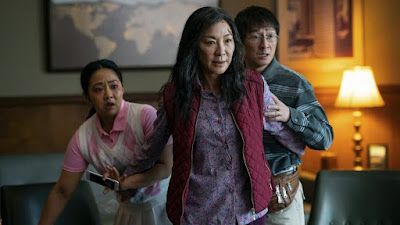 Still, a not-so-quick summary: Michelle Yeoh plays Evelyn, the harried owner of a laundromat and the harried wife to Waymond (Ke Huy Quan, whose profound familiarity from the 1980s classics The Goonies and Indiana Jones and the Temple of Doom is extremely beneficial to this movie goosing our emotions more than once) and the harried mother to a gay daughter Joy (Stephanie Hsu) and the harried daughter of a mostly comatose father Gong Gong (the legend James Wong, and as with Quan you should definitely be thinking about all those 80s movies where Wong played the Big Stereotypical Asian Villain, most especially Big Trouble in Little China).

Technically Everything Everywhere All At Once takes place across the course of a single day, which would be Gong Gong's birthday, where Evelyn is planning to throw a party in the laundromat for him, inviting all of her customers. (Shout out to Jenny Slate who is very funny in a small role as one of the customers, one whose little dog friend factors into one of my favorite outrageous action scenes contained herein.) That "day" is only theoretical though, because in practice this movie stretches from the Big Bang and front to backwards, springing around like an elastic band wielded by a drunken master.

If I'd attempted to take notes on this movie -- for the record I did not -- my papers would have descended into squiggles and cross-hatch; it's not so much a movie on first view as it is an experience. This thing happens to you. There are gags that land and gags that thud, there are emotions that soar and ones that sour, and I can't imagine everybody will want to be dragged as happily along for the ride as I was. But around the time Jamie Lee Curtis (on hand to goose the John Carpenter feels, I gather) was slapping her hot dog fingers against Michelle Yeoh's lips in sensual ecstasy I'd thrown my own hot dog fingers in the air and stopped resisting -- and can I tell you that when I started writing about this movie I hadn't even thought about the "hot dog fingers" since seeing the film? This is the sort of movie where you've got so much on your plate "hot dog fingers" somehow fall down the list.

So as an experience and not a movie I'm just gonna shut up at this point and say go see this maniacal miracle of a movie. This experience. Go experience this singular experience. It's truly one-of-a-kind, and things this unique don't come along very often. Things this unique don't come around nearly ever -- I can count the recent ones on one of my hot-dog-fingered hands. All of everything might not land with precision, but the accumulative effect of this story -- which in earnest, at its heart, is really just the story of two people who love each other trying to truly see one another -- had me madly weeping in my seat. My face-mask full of tears I swam out of the theater and down the street and all the way home dazed and beautifully awash in gonzo wonder. And what, my friends, a wonder that is. 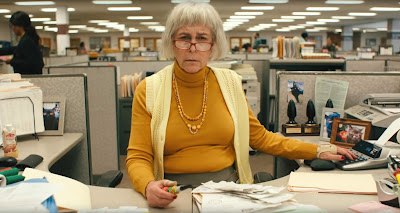 Save all the typing. Just say it stars Michelle Yeoh and we'll watch it! :D

Her scene on Star Trek: Discovery being interrogated by David Cronenberg is so awesome.