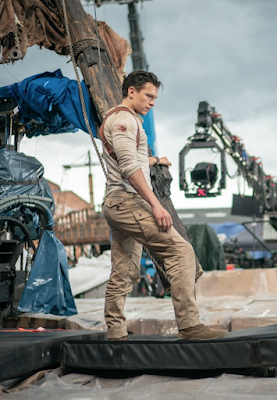 If you're going to go see the video-game adventurer Uncharted to simply see Tom Holland in a series of wet t-shirts and bulging khakis (see down below) then you're going to get what you're looking for -- our Spider-twink looks plenty fine in the film, hitting theaters on Friday. It definitely has that much going for it! Otherwise not so much though, so be forewarned, and get your fore more warned by heading over to The Film Experience where I have properly reviewed the film today. The basic gist is I have seen far worse movies in my life, this one has some big action-movie-spectacle moments, but it's also soullessly bland to the point where it's already half-slid off my brain less than 24 hours later. I miss action movies with actual character, you guys.

Where did this small British white boy with a ghetto booty come from? Every time I see him, he just gets hotter. Cavill got one too.