Just Before After Yang 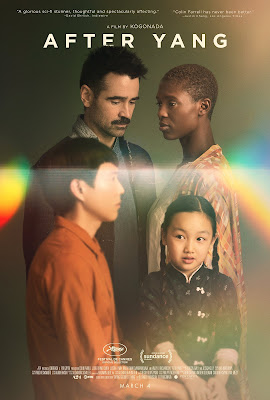 When I rounded-up my Sundance coverage yesterday I mentioned that there could be more to come because there are about thirty films I saw at the festival that I haven't written about yet and might want to -- well one of the biggest titles to fall under that umbrella is Kogonada's film After Yang starring Colin Farrell, which just got a poster and a trailer this week, which I will share with you now. A24 is releasing the film simultaneously in theaters and on Showtime on March 4th and I hope I do find the time to write about it because it's a stunner...

... Kogonada directed Columbus (a romance with John Cho and the great Haley Lu Richardson) a couple of years back and that was an immediate classic but this one's probably even better? It wades into such heady territory with such grace and ease, and Colin Farrell's performance is so simple and moving... anyway this will be absolutely one of the year's best no matter how great the year turns out to be, so I recommend you seek it out come March. Here's the trailer:
Who? Jason Adams When? 3:00 PM
Labels: Colin Farrell, Great Moments In Movie Staches, Sundance, trailers

Looks interesting. Doesn’t hurt that Colin is in it either.

Who’s the hunk on the couch?

"Who’s the hunk on the couch?"

It took me a second to figure out who you meant -- you're asking about the site's banner this week right? That's Michel Piccoli in Jean-Luc Godard's film Contempt.

Yes. Him on the banner. Thx.