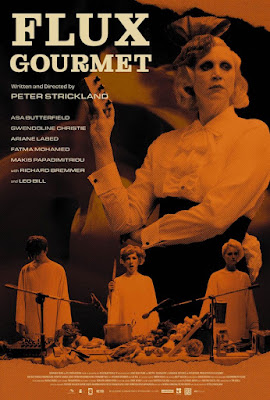 The first poster for Peter Strickland's Flux Gourmet has been released (via Indiewire) -- this comes on the heels of the first trailer, which I shared with you on Monday. Strickland, one of my most beloved weirdo auteurs currently working, has previously gifted us with the movies Berberian Sound Studio, The Duke of Burgundy, and In Fabric, all MNPP faves, and this one will hopefully take its place in the pantheon alongside those titles when it hits deez streets later this summer. The film's premiering in Berlin today so those lucky bastards who are at that fest will presumably be dropping reviews soon -- I will try not to read any of them so I can go into the film clear-brained, but I can promise nothing. I also thought I'd do that with Francois Ozon's Fassbinder-riff Peter von Kant, which premiered yesterday there, and I ended up spending all afternoon looking up everything about it...

Some photos from Berlin of dreamboat Denis Menochet with Ozon and co-star Khalil Ben Gharbia (who plays the Hanna Schygulla role) (also apparently Schygulla is IN THIS and I just want to die, I WANT TO DIE, why can't I see this NOWWWWWWW) pic.twitter.com/MvoY4JVRP3