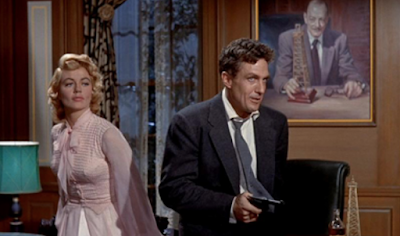 Kyle Hadley: To beauty, to truth
which is anything but beautiful.

As I told you was happening back in November today Criterion has put this, arguably Douglas Sirk's most entertaining film, out onto blu-ray at last -- you can pick it up right here at this link. This is an upgrade -- they had previously put it out on DVD -- but clearly worth it, given the technicolor boom of this flick; it pops like fireworks.

Live footage of me reacting to @Criterion's new blu-ray of WRITTEN ON THE WIND being out today! https://t.co/PL74WbRjSQ pic.twitter.com/GNfCcMvXkH

And I'm not just talking about Dorothy Malone's outrageous Oscar-winning performance. (But on that note this is definitely a Top 5 Oscar statue for me, mostly because I can't believe it happened -- love it when they embrace something this bold.) Anyway if you need a reminder of all the fancy special features on the new Criterion disc I've got them right on after the jump for you... 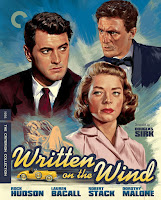 Douglas Sirk’s Technicolor expressionism reached a fever pitch with this operatic tragedy, which finds the director pushing his florid visuals and his critiques of American culture to their subversive extremes. Alcoholism, nymphomania, impotence, and deadly jealousy—these are just some of the toxins coursing through a massively wealthy, degenerate Texan oil family. When a sensible secretary (Lauren Bacall) has the misfortune of marrying the clan’s neurotic scion (Robert Stack), it drives a wedge between him and his lifelong best friend (Rock Hudson) that unleashes a maelstrom of psychosexual angst and fury. Featuring an unforgettably debauched, Oscar-winning supporting performance by Dorothy Malone and some of Sirk’s most eye-popping mise-en-scène, Written on the Wind is as perverse a family portrait as has ever been splashed across the screen.
BLU-RAY SPECIAL EDITION FEATURES
• New 2K digital restoration, with uncompressed monaural soundtrack
• Acting for Douglas Sirk, a 2008 documentary featuring archival interviews with Sirk; actors Rock Hudson, Robert Stack, and Dorothy Malone; and producer Albert Zugsmith
• New interview with film scholar Patricia White about the film and melodrama
• Trailer
• English subtitles for the deaf and hard of hearing
• PLUS: An essay by filmmaker and critic Blair McClendon